Boeing's Future Blended Wing Body Aircraft Back in the Tunnel 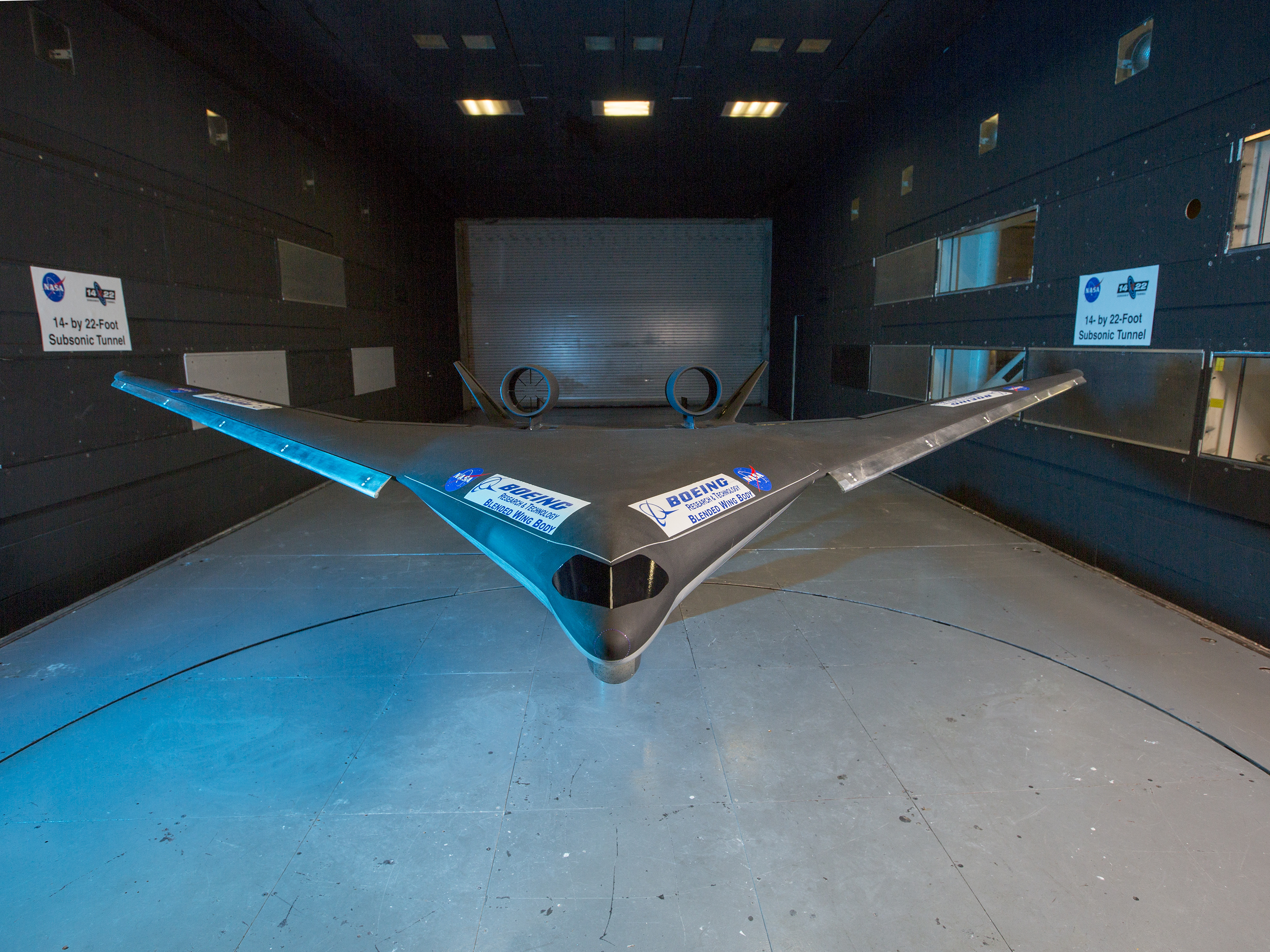 With NASA's initiative to provide quieter, greener aircraft for the aerospace industry also comes emerging technologies that enable engineers to through examine the functionality of the aircraft in unprecedented detail.

One of their newest additions to their future fleet includes a futuristic blended wing body (BWB) design. The design in comparison resembles the shape of a diving hawk, however, tends more towards a triangular design. The model is currently undergoing tests in the 14-by 22-Foot Subsonic Tunnel at NASA's Langley Research Center in Hampton, Virginia.

"We're happy to have the model back in our wind tunnel,"

"It gives us a couple of opportunities - to add to our knowledge about this configuration as well as how to improve our testing methods."

The design of the craft, as the name would suggest, merges the wings with the bod of the craft. The unique shape is unlike any other aircraft, forgoing the generic design of other aircraft by tending towards a design in which merges the wings and body into an extraordinary craft. Towards the rear lies no tail section, only an area where the engine and vertical stabilizers are mounted.

Previously, the same aircraft model was tested within the Langley 14-by 22-Foot tunnel in 2014 and in the 40-by 80-Foot Wind Tunnel at NASA's Ames Research Center in California in 2015. Tests were run to analyze the fuel efficiency, noise levels, and emissions as part of NASA’s Environmentally Responsible Aviation program.

“Plus these tests will let us do PIV – something we didn’t do before."

PIV, or particle image velocimetry is a method of optically analyzing instantaneous velocity measurements in fluids. The recent tests were run a little differently this time around. The wings were painted a non-reflective matte black as to minimize reflections from laser lights that will sweep across the craft. The lasers in combination with smoke enables the researchers to map the airflow over the model and precisely refine and tune the aircraft

"We didn't get the opportunity to use PIV in the previous tests,"

"It helps us analyze the flow going into the engine inlets, which is one of the challenges with this design since the engines are on top of the fuselage, toward the rear."

The objective of engine placement is based around the central idea of installing the jet where there is a clean airflow (among other considerations). So with the worry of airflow, why place the engines on top? According to NASA researchers, the placement reduces noise pollution by directing the noise upwards where it is dissipated into the atmosphere. While green technologies are a foal point of NASA's, producing quieter planes is also of a desirable.

According to Boeing, the model may not just be a concept for much longer.

"Backed by decades of successful structural, wind tunnel and flight testing of two different X-48 aircraft configurations, Boeing is readying the BWB for the next step in maturing this technology: a manned demonstrator"

Once the research is concluded, NASA plans to unveil the findings to the public in an effort to benefit all of aviation. While not very many metrics pertaining to the function of the craft have been released, NASA and Boeing promise their craft could be the most efficient one yet.

“We believe our body of work, both in design, test and engineering, is technically superior when compared to other designs in the marketplace,”

“The BWB is showing great potential to offer structural, aerodynamic and operating efficiencies as well as the capability to be more fuel efficient and quieter over more traditional aircraft designs.”

SEE ALSO: Boeing 777 Made Entirely of Manila Folders Will Amaze You

Airbus' New Design That Could Revolutionize Flying as We Know It