Boeing's record-breaking 777X-9 aircraft is now ready to undergo a thorough round of testing before it hits the skies for commercial flights.

The Boeing 777X-9, having passed a round of dramatic teasers leading up to the unveiling, is now gearing up for a thorough round of testing before its first commercial flights, which should begin in 2020, with test flights starting as early as next year.

The company offered a peak of what's to come recently in the form of its static test plane, which will seat up to 425 passengers.

The most dramatic design features which set it apart are (1) its folding wingtips which achieved more than 8 meters of flexion during testing, and (2) the sheer size of the aircraft, measuring 76.7m long, which incidentally makes it the longest commercial airplane and largest twin-engine jetliner ever to be created.

The passengers stand to benefit the most from the enhanced features found inside the aircraft. In addition to improved temperature control and air quality, the cabin also boasts lower altitude and noise as well as special smooth technology.

Best of all, however, in creating the aircraft the engineering team addressed the classic issue of space maximization by first reducing the thickness of the cabin walls by 5 cm, which then allowed them to make the overall cabin space 10 cm wider.

Though it may not seem like much, for travel-weary passengers the space reorganization will make all the difference. Finally, there's the all-important window, the source of calm, or anxiety for others, on the plane: each one measures 0.1m2, is placed higher than in earlier Boeing aircraft and is overall 29% larger.

Among the other impressive range of specs in the aircraft are:

--> Enhanced Aerodynamic Technology: Improved lift-to-drag ratio (L/R)  thanks to the longer wingspan, a folding wingtip that conforms to taxiway and gate standards while still offering high span efficiency, and laminar flow nacelles that achieve a reduction in drag with improved airflow.

--> Total Connect: A system that offers enhanced communication via a centralized network between operations, flight crew, cabin crew, and passengers.

--> Touch Screens: This innovative feature is easy to use, offers a higher level of interactivity with its multiple touch points, as well as improved efficiency.

With all these enhanced design features, as well, as the larger size of the aircraft, the engineering team has still managed to create a commercial plane which it feels will achieve 5% lower fuel consumption, 10%  lower fuel costs, most importantly, 29% emissions: all of this equates to an overall 12% improvement in fuel efficiency. 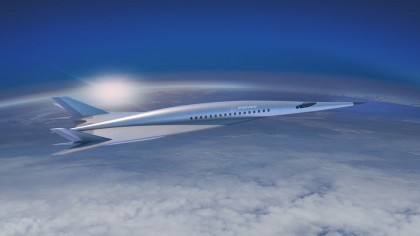 The plane entered production back in October 2017 much to the excitement of Boeing's team.

“It’s been so exciting to see the first parts come through after years of preparing for the first airplane,” had said Paul Clark, 777X wing assembly mechanic.

“We’ve got a great team here and all of us are eager to begin using the new equipment and processes.”