The Defiant is tipped to be the replacement of the long standing Blackhawk helicopters.

Boeing’s latest military helicopter the SB-1 Defiant completed its first flight last Friday. The aircraft could one day replace the famous Black Hawk Helicopter currently in use by the U.S military. The Defiant was jointly developed by Boeing and Sikorsky, a Lockheed Martin Company.

The Defiant uses an unusual propulsion system that utilizes a pusher propulsor instead of the traditional tail rotor. Its makers say the result is a craft with superior handling that will change the face of the U.S. Army helicopter force.

“The design and development of DEFIANT has revealed the capability advancement that is truly possible for Future Vertical Lift,” said David Koopersmith, vice president and general manager, Boeing Vertical Lift.

“Clearly, the performance, speed and agility of DEFIANT will be a game changer on the battlefield and we look forward to demonstrating for the U.S. Army the tremendous capabilities of this aircraft.”

The Defiant is just one entry into the plan to replace the UH-60 Blackhawk helicopter. Despite its successful career since the 1980s the U.S Army has decided to hunt for a replacement. The Joint Multi-Role-Medium Technology Demonstrator program has been set up with the goal to find the new aircraft.

It is expected recent developments in technology will allow the future selected helicopter to have longer range and better performance in high-altitudes. The Defiant helicopters have a distinct look- it has two sets of counter-rotating main rotors and a rear-facing propulsor propeller for forwarding thrust. 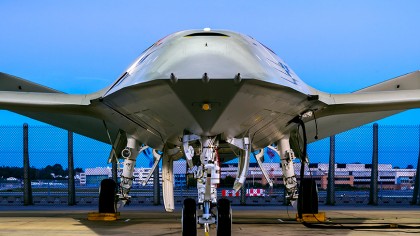 “This design provides for exceptional performance in the objective area, where potential enemy activity places a premium on maneuverability, survivability, and flexibility. We are thrilled with the results of today’s flight and look forward to an exciting flight test program.”

The Joint Multi-Role-Medium Technology Demonstrator program is expected to Select a viable Blackhawk replacement by the end of the 2020s.