Boeing's Aurora Flight Services announced today the introduction of their high-altitude pseudo-satellite called Odysseus, a vessel it says is the world's most capable solar-powered autonomous aircraft. And the claims are no joke! 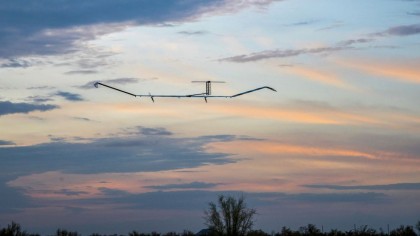 The ship is an ultra-long endurance high-altitude platform featuring a combination of advanced solar cells and lightweight materials that allow it to effectively fly indefinitely powered only by the sun. If that's not impressive enough, Odysseus boasts the biggest payload capacity available in persistent solar aviation today.

The vision for Odysseus began back in 1988 when Aurora President and CEO John Langford, along with other MIT colleagues, broke the record in distance for human-powered flight with a 72-mile trip between the Greek islands of Crete and Santorini. The mission was called the Daedalus Project and its record still stands today.

"Aurora was founded by the idea that technology and innovation can provide powerful solutions to tough problems that affect all of humankind. Odysseus was an idea born out of Daedalus that is now a real solution to advancing the important research around climate change and other atmospheric chemistry problems," said Aurora President and CEO John Langford.

"Odysseus offers persistence like no other solar aircraft of its kind, which is why it is such a capable and necessary platform for researchers. Odysseus will indeed change the world."

Odysseus boasts many novel and even groundbreaking capabilities. For starters, the ship is the only solar aircraft that can persistently and autonomously remain on station, enabling communication and data gathering over a specific location.

Odysseus also has a greater year-round global operating zone than any other vehicle in its class, can carry a larger payload than any other aircraft in its class (both in development and in production), and can be deployed at a mere fraction of the cost of a satellite.

The vessel can operate far above the weather and other aircraft, allowing it to cover an exceptionally broad geographic area without ever relinquishing its station. It is also highly adaptable and reconfigurable meaning it can continue to be repositioned and reprogrammed according to mission requirements or even technology advancements.

Due to all these impressive features, Odysseus is ideal for climate and weather researchers working to measure crucial but complicated environmental degradation factors including vegetation, ice coverage, and even ground moisture. The aircraft may also prove increasingly useful for managing climate-related natural disasters due to its unique ability to track and measure the movement of severe weather events.

But, Odysseus is not limited to the environmental field. The vessel's unique persistence means the craft can also find important applications in operations across communication, connectivity, and intelligence. And best of all, it can do it all with zero emissions.

Odysseus' first flight is scheduled for Spring of 2019 and like the tale it is named after, whatever journey this aircraft embarks on, it will be able to stay on it for a long long time. Safe travels solar-powered superhero!