New DNA testing has confirmed bones held by the Russian Orthodox Church belong to Tsar Nicholas II and his family.

Authorities have confirmed that bones suspected to belong to the murdered Russian Tsar family are legitimate thanks to new DNA testing. The confirmation is the first step for the Russian Orthodox Church to formally recognize the remains and re-bury them with full religious ceremony and rites.

The genetic testing was originally ordered by the church who had disputed earlier tests that had confirmed the bones as belonging to the former ruling family. The new test comprehensively "confirmed the remains found belonged to the former Emperor Nicholas II, his family members and members of their entourage.”

The Russian Investigative Committee, which normally looks at serious crimes has become involved in the long-running saga. The committee’s investigators confirmed they had exhumed Nicholas's father Alexander III, and had proven "they are father and son.”

The Orthodox Church praised the committee’s handling of the case and said they would now review the evidence presented to them.

The Bolsheviks, shot and killed Tsar Nicholas II, his wife Tsarina Alexandra and their five children Olga, Tatiana, Maria, Anastasia, and Alexei and some of their supporters from the night of July 16 to 17, 1918 as they were held captive in the Urals city of Sverdlovsk, now Yekaterinburg.

Their remains were burnt and buried, and not discovered until 1979 when the bones of Nicholas and Alexandra were uncovered. The Bolsheviks were a group founded by Vladimir Lenin and Alexander Bogdanov in 1905.

The group was comprised of workers guided by the principle of democratic centralism, they considered themselves the revolutionary working class of Russia. Despite the remains being interred in Saint Petersburg in 1998, the Orthodox Church refused to give them a full burial service, unable to find evidence the bones really did belong to the Tsar and his family. 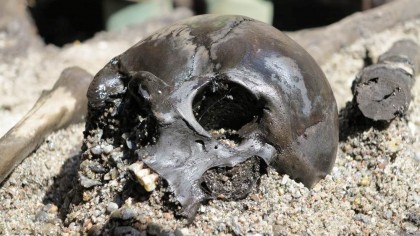 An investigation by then-president Boris Yeltsin failed to convince the church with many in the clergy reportedly feeling sidelined by the way the investigation was handled. Rumors persist that one of the children managed to escape execution as only the bones of Tsar's only son Alexei and his daughter Maria have been found.

These remains have never been buried. The remains of the family have caused a lot of discussion within the Orthodox Church who despite not recognizing the remains formally have canonized the ex-Tsar and his family as martyrs, and treat their bones as holy relics.

It was expected that the church would formally bury the remains of the family with full rites as part of the 100 year anniversary of their death. However, the church says it is still investigating and will look at both the scientific evidence in combination with historical documents before making a decision.

Church leader Patriarch Kirill led a procession of thousands of believers from the family's murder site to a monastery nearby in an event to mark the anniversary on Monday.