The Boring Company founder and CEO Elon Musk said that flamethrowers' delivery had been thwarted due to shipping issues. The solution will see the firm custom deliver the products themselves.

By  Loukia Papadopoulos
May 18, 2018
The Boring Company/YouTube

The Boring Company founder and CEO Elon Musk revealed some hopeful news for recent flamethrower buyers while speaking with his project leader Steve Davis at the company's information session in Los Angeles. The interview held on Thursday can be seen in a video released on Youtube by The Boring Company.

Musk addressed the delivery challenges that have seen the delay of 20,000 flamethrowers sold a few months ago. The problem was related to regulations regarding the shipping of products loaded with propane.

"Yeah, we’re just gonna get some vans and some people and deliver it to you,” Musk added. Deliveries are set to begin in two weeks.

The $500 flamethrowers raised $7.5 million for The Boring Company early this year. However, since then the product has faced some regulatory complications.

Musk tweeted in February that “some customs agencies are saying they won’t allow shipment of anything called a Flamethrower.” His solution? Renaming the device: “not a Flamethrower.”

Not a Flamethrower buyers also received a Google form with terms and conditions of use and a disclaimer stating that The Boring Company is not responsible for anything done by customers “no matter how genius or stupid.” The form also featured a cheeky safety rhyme: “I will not use this in an unsafe way, the best use is crème brûlée.”

The company’s Boring Bricks were also heavily featured in particular for their suitability in the construction of affordable housing.

Musk reiterated his promise that Urban Loop transit will cost only $1 per ticket and said the pods will each hold a maximum of 16 people. The CEO also discussed cooperation with LA Metro, using Rocket technology to develop tunnels, and the company’s dedication to doing a full Environmental Impact Report. 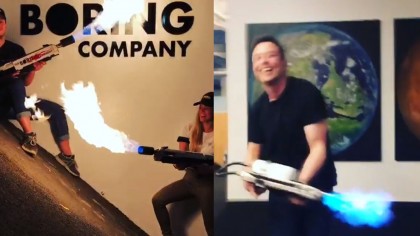 Musk seemed in a good mood and made a carefully placed joke regarding the announcement of his flamethrowers' delivery.

When discussing giving rides in his new tunnel for public feedback, the CEO playfully added: “It’ll be like a weird little Disney ride in the middle of LA. Bring your flamethrower.”

The CEO also quipped that he was only willing to take “real” questions. “I get a lot of flack these days for questions,” joked Musk as the crowd laughed.