Boring Company Will Build A Garage That Connects to Underground Tunnel

The Hawthorne City Council approved the firm's futuristic prototype plans after being assured security and noise-control measures were in place.

Infrastructure and tunnel construction firm The Boring Company has won approval by the Hawthorne City Council to build a futuristic garage prototype that would connect passenger cars directly to the firm's underground hyperloop. The resolutions allowing the ambitious project to begin were passed Tuesday night.

The revolutionary proof of concept will be implemented in a private residence abutting the firm's current one-mile underground tunnel located beneath 120th Street between Hawthorne Boulevard and Prairie Avenue. The firm's house is also in close proximity to SpaceX.

Now, this home will soon house the first ever residence garage connecting to the already novel tunnel. However, certain limitations have been placed on the firm's plans.

The test elevator may not be opened to the public nor can the firm allow cars to move in and out of the garage from the street. Future vehicles will enter the tunnel from the SpaceX campus and, once they reach the garage, will simply return back to where they came from. 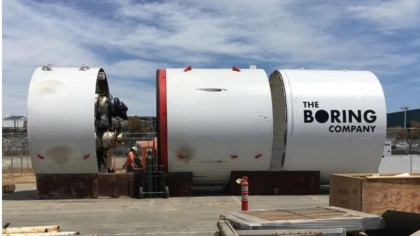 The conditions are meant to ensure local residents are not burdened with additional traffic. So far, over 100 residents have been notified about the upcoming construction but have been assured all work will be done with minimal to zero impacts on neighborhood noise levels.

The firm is also responsible for securing both locations which it plans to do through several measures including 24/7 video surveillance and triple-barrier protection. The firm provided a security plan reviewed by the Department of Buildings.

The same gas, ventilation testing and fire prevention measures used on the test tunnel will also be implemented in this project. Pre-condition surveys will be undertaken on surrounding properties and property damages incurred as a result of construction will be covered by the firm.

Fast but not rushed

The firm plans to lease the home while constructing the garage which raised concern during the hearing. The firm's representative, however, replied that all operations would be "invisible and inaudible."

Representatives also said Hawthorne police and fire departments would be reviewing the company's security plans, however, they would not be required to provide any further support. All security measures would be implemented by The Boring Company.

Finally, the council expressed concerns about the "rushed" nature of The Boring Company's plans. Representative Brett Horton explained the firm was not trying to bypass public process but was just proceeding at a rate they felt prepared for.

"Yes, we do move fast. We are trying to revolutionize transportation and don’t want to get bogged down," Horton said. The car elevator has already been demonstrated at The Boring Company's Hawthorne headquarters.

Meanwhile, upon announcing his Hawthorne win on Twitter, founder Elon Musk revealed the first Boring Brick store would open in about 2 months. Bricks would be only 10 cents each and free for affordable housing projects.

Before Elon Musk Builds a Tunnel Under Chicago, He Should Remember the Chicago Flood