Elon Musk has shared an Instagram video showing The Boring Company's test tunnel up and running.

Elon Musk has announced The Boring Company will give visitors a free ride in its newly completed underground test tunnel beneath suburban Los Angeles. The Boring Company’s CEO says the tunnel’s transportation system will open for free rides to the public in a few months.

Musk shared a video of the tunnel on Instagram with the caption: “First Boring Company tunnel under LA almost done! Pending final regulatory approvals, we will be offering free rides to the public in a few months. Super huge thanks to everyone that helped with this project. Strong support from public, elected officials & regulators is critical to success.”

First Boring Company tunnel under LA almost done! Pending final regulatory approvals, we will be offering free rides to the public in a few months. Super huge thanks to everyone that helped with this project. Strong support from public, elected officials & regulators is critical to success. As mentioned in prior posts, once fully operational (demo system rides will be free), the system will always give priority to pods for pedestrians & cyclists for less than the cost of a bus ticket.

The Boring Company has projects on both coasts

Musk also wrote on Twitter that the company's DC to NYC route had been started and that The Boring Company was preparing to start work on an LA to SF route in 2019. He said the LA-SF route will be a “true hyperloop with pressurized pods in near-vacuum tunnels, and faster than a jetliner."

Already started DC to NY route.
Hopefully start LA to SF next year. That will be true @Hyperloop w pressurized pods in near vacuum tunnels & faster than jetliner.

Musk has a vision for The Boring Company to be part of a revolutionary transport system. Cars would be transported through underground tunnels on ‘electric skates’ at speeds of up to 240 km/h.

The overarching idea is to connect cities in a safe and direct manner. The Boring Company and its technology will also be able to support a Hyperloop system. The hyperloop once developed has the potential to carry both human and cargo loads at top speeds of 997 km/h. 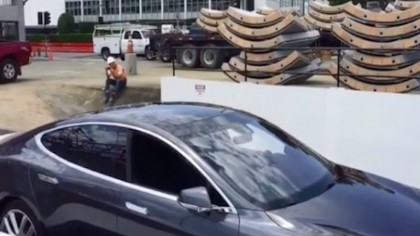 It works by utilizing a linear electric motor to accelerate an electromagnetically levitated pod through a low-pressure tube. The Boring Company has approval from the Hawthorne City Council in California to dig the 2-mile test tunnel under its airport adjacent to SpaceX.

The Boring Company has reportedly been using a repurposed tunnel-boring machine to complete the work. The machine was once used for digging sewage lines in San Francisco.

Senior director of facilities and construction at Space X, Brett Horton, says the 2 miles (3.2 km) tunnel will be undetectable from the surface. The tunnel will be dug, 44-feet (13.4 m) below ground, well underneath existing facilities. He says, “You don’t see it, don’t hear it, and certainly don’t feel it. Everything happens underground, we won’t have construction crews walking down the street. We won’t have excavators.”

Projects will focus on people and bikes

The initial idea of building underground tunnels was to transport cars from city to city to avoid traffic congestion and save time. Musk has since rethought and clarified the Boring Company's vision with a tweet saying: “Adjusting The Boring Company plan: all tunnels & Hyperloop will prioritize pedestrians & cyclists over cars.”

A video on The Boring Company’s website shows passengers stepping into a clear pod that is lowered into the ground then moves underground at high speed. Musk calls the system The Loop and has laid out plans for the first segment to be installed on the East Coast of the United States, connecting Washington DC to downtown Baltimore.