Bosch's New Technology Injects Water into Your Engine – On Purpose

Water is typically something you want to keep out of your engine, but a new engine design from Bosch actually injects water into the combustion chamber to enhance performance. Called WaterBoost, which sounds like something you would have on a powerboat, not a car, injects distilled water into the intakes. You may be thinking that since water is incompressible that this helps maximize power output, but in fact it is used to cool down the combustion chambers faster. Check out the video below that will demonstrate how the process works.

This water injection allows the engine to operate at higher compression ratios, which in turn increases efficiency. This increase in efficiency means that fuel consumption can be decreased by 13 percent during acceleration. WaterBoost can be fitted to most modern engines, as it is just an add-on modification that can significantly improve your engine's performance. A distilled water talk is held in the engine compartment, and by Bosch's estimations, it only needs to be refilled every 2000 miles.

Believe it or not, water injection in engines isn't actually that new of a technology. BMW uses it in their M4 GTS, and it has been used for many years in military aviation engines, according to CNET. 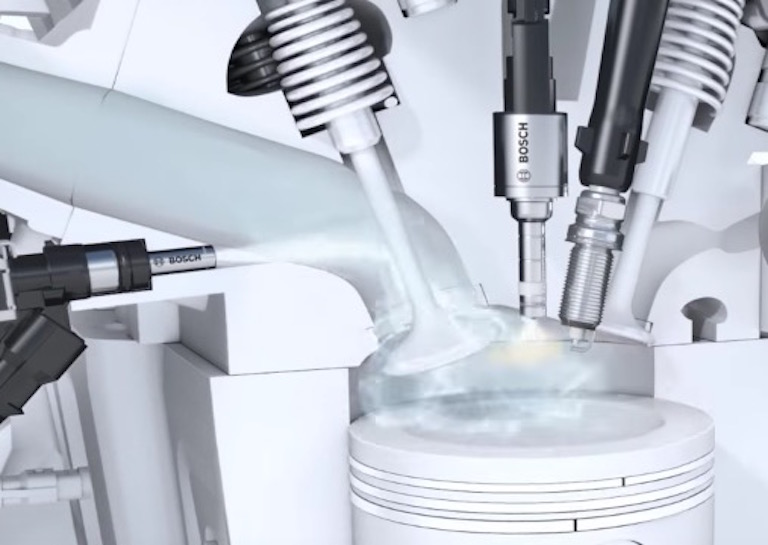 Bosch is the first company to widely manufacture a water injection system that drivers can use to modify their engine's efficiency. Don't worry, when applied correctly in the WaterBoost system, the water only benefits your engine, not harm it.