The company will be producing four-legged robot called ‘SpotMini’ at the rate of 1,000 units per year.

You will most likely recall the four-legged robot when you hear about Boston Dynamics. These scary robot dogs can climb the stairs, dodge the obstacles, and can easily move on rough terrain with excellent stability. If you knock them down, they’ll get up on their own and will keep marching.

While it took years of intensive research to develop a range of agile robots, Boston Dynamics has finally announced its plans to bring their first commercial product to market – SpotMini. The dog-like robot is rather a smaller variant that stands 2 feet, 9 inches and looks a little less scary over the other metal walking machines developed by the company.

Boston Dynamics has announced that they are going to produce close to 1,000 robot dogs by mid-2019 with a goal to make the product as a popular open-source platform just like the way Android is for smartphones.

The product page of the SpotMini says, “SpotMini is a small four-legged robot that comfortably fits in an office or home.  It weighs 25 kg (30 kg if you include the arm). SpotMini is all-electric and can go for about 90 minutes on a charge, depending on what it is doing.  SpotMini is the quietest robot we have built.”

Considering the flexibility and application, SpotMini maintains a perfect balance between size and performance. In addition, the robot dog also has a provision to house an attachment to its head that enables it to interact with various objects.

The agile robot is designed more elegantly than its bigger brother Spot. Unlike its predecessors, SpotMini is free from exposed wiring and bare metal and has a sleek design that makes it look like a commercial product.

However, the trade-off comes in the form of a payload as the SpotMini can only carry 14kg compared to 23kg with Spot. Given the smaller size, the robot can easily operate in offices and homes.

The company believes that applications of such robots are plenty and they are already testing the SpotMini for clients across construction, delivery, security and home assistance. It does hold a great potential to be used for automated delivery services.

It is still unclear as to how the robot dogs can be used effectively, as navigating through crowded cities is quite an arduous process. However, the SpotMini comes with a 3D view that helps it to see things better and recognize height deviations and boundaries. 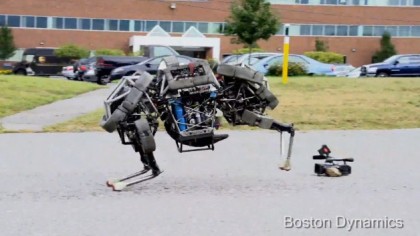 After Google sold the company to SoftBank in 2017, the decision to make the robots commercially available might start bringing more profit to the company.

We will still have to wait and watch to see how the events unfold. We might get answers to all our questions once these thousand robot dogs roll-off the Boston Dynamics production line.