Since the beginning of the modern engineering science engineers try to copy and implement natural motions of animals and humans into the machines they construct. At present we know about several projects of Boston Dynamics funded by DARPA, such as the charged by wire Cheetah, Atlas, the anthropomorphic robot, and the wireless BigDog. Not so long ago Boston Dynamics released only a video of their latest project called WildCat – another semi-autonomous animal-like robot. Right under the YouTube video they tell us to visit their website for more information, but at the moment the company didn't published anything there. 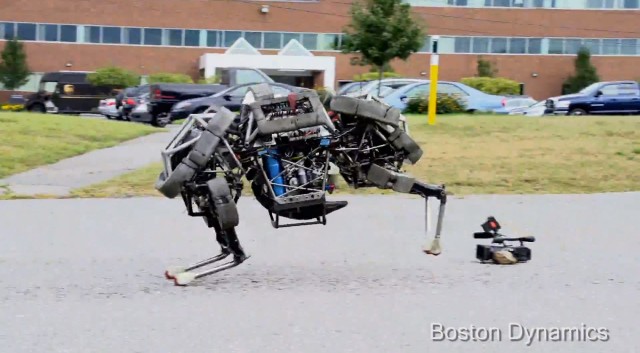 So, what do we see from the video? In the description below is stated that the four-legged vehicle is able to run at 16 mph (25 km/h) and is funded by the M3 program from DARPA. While watching the video we hear the noise and see the smoke of starting and continuous work of a four-stroke gasoline or diesel engine. Radiators with propellers on both sides tell us that the engine is liquid cooled. Probably the legs are moved by some kind of pneumatic or hydraulic system and the whole thing is obviously controlled by electronics. Electronics require electricity, therefore the mechanic animal should have some sort of a battery and an alternator. But, until Boston Dynamics reveal the information officially, we can not know any details for sure.