Brain-Controlled Prosthetics Are Progressing Faster Than We Could Imagine

Innovative approaches to brain-controlled prosthetics were on full display at the annual Neuroscience 2017 meeting.

A number of studies presented at the Neuroscience 2017, the annual meeting organized by the Society for Neuroscience that highlights some of the top innovations and research being carried out in the field, indicate that we may be closer than we previously thought to a larger-scale development of prosthetics which are controlled by the human brain. 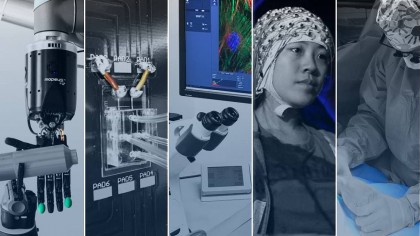 “Unlike many pharmacological or biologic therapies to help people with neurological injuries or disease, engineering solutions have the potential for immediate and sometimes dramatic restoration of function,” shared Leigh Hochberg of Massachusetts General Hospital, Brown University, a neurotechnology expert who moderated the conference, adding about the evolution of R&D efforts, “It is really exciting to see how the growth of fundamental neuroscience and neuroengineering research over many years is leading to the creation of technologies that will help to reduce the burden of neurological and psychiatric disease.”

Thanks so much to @RepMcNerney, Drs. Windy McNerney and John Morrison, and Ms. Soy Lopez for touring the #SfN17 floor and learning more about this brain-machine prosthetic interface. #neuroadvocate pic.twitter.com/DoCw8x6TKR

There were four main findings presented, and each demonstrates an incredible advancement:

-Using neural signals obtained from an extracted rodent spinal cord, researchers were able to manipulate cultured muscle fibers, a new approach in understanding how movement can be directed by the nervous system.

-Research findings based on how an amputee patient's ability to regain the sense of touch via a prosthetic hand provides a host of benefits, most important among them being an improvement in motor skills

-Finally, the impact of a completely organic retinal prosthesis—composed of layers of photosensitive silk and polymers—on both brain behavior and activity related to vision

Scientists have been hard at work for the past decade on research and development (R&D) efforts in the field of neural prosthetics, a discipline that links neuroscience with biomedical engineering. The cross-disciplinary approach—the first is more research-grounded, and the latter more industry-linked—could explain the rapid acceleration we are witnessing in the field. In addition, there is a broad level of support, ranging from the influential National Institutes of Health to university centers, to even a number of philanthropic organizations engaged in the urgent work of ensuring that prosthetics is one area of that benefits from 21st-century innovations.

One example is the University of Pittsburgh’s Human Neural Prosthetics Program, whose sole aim is to “explore the utilization of brain computer interfaces for improving the lives of patients with motor disabilities.”

The reality is that field of neural prosthetics, which provide invaluable support for millions worldwide who, through injury, illness or amputation lose the function of some part of their body, will continue to experience one breakthrough after another, if this year’s meeting is any indication. The use of polymer makes the crucial difference in “the biocompatibility of the implant...[because] polymer is more compatible with the human body than the silicon in conventional neural probes used in neuroscience studies,” reports Dr. Sarah Felix, American Society for Mechanical Engineers (ASME) member and a lead researcher at Lawrence Livermore.