For the first time ever, a paralyzed man has regained the ability to move his hand using only signals from his brain. A new study from Ohio State University has pioneered research that has enabled Ian Brukhart to move his hand once again, even being able do everyday tasks with his hand. Previous technology used robotics or nerve sensors in the patient's arm, but this technology is the first to use a chip embed in the patient's brain that reads his thoughts and translates that signal to electrodes on his arm. Essentially the device short circuits the brain and allows it to control the muscles once again, circumventing the damaged pathways.

So far, the device is fairly limited to it's applications, as Ian can only use it when he is under the care and supervision of the medical staff at the Wexner Medical Center. However, to someone who is paralyzed, being able to move his hand even just a few hours a week is an incredible feeling. The team developed a special sleeve that connects to a computer interpreting the patient's brainwaves into useable data.

According to Time, Burkhart was a college freshman when he suffered a devastating brain injury after diving into an ocean wave, not realizing there was a sand bar shortly underneath. The tiny chip implanted in Ian's brain contains 96 different electrodes that hook up to where the brain would send signals to the paralyzed limb. Through careful placement by the surgeons behind the research, this breakthrough is gaining new ground. 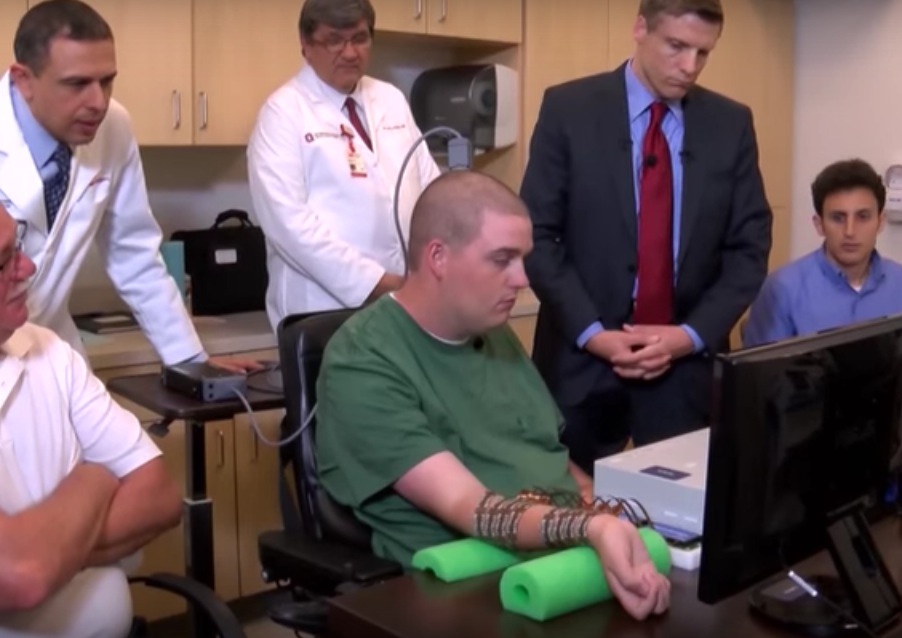 The sensation in Burkhart's arm apparently feels like a slight tingle, but this is far overshadowed by the ability to move his arm. One thing that you may not realize about getting this technology to work is the shear amount of concentration that it takes to focus your brainwaves. Moving our appendages now often requires little thought, but pinpointing your thoughts to a limb you don't have is quite the challenge, according to Burkhart. The computer algorithm that interprets his thoughts actively learns and improves upon its capability of translating thoughts into actual electrical impulses. 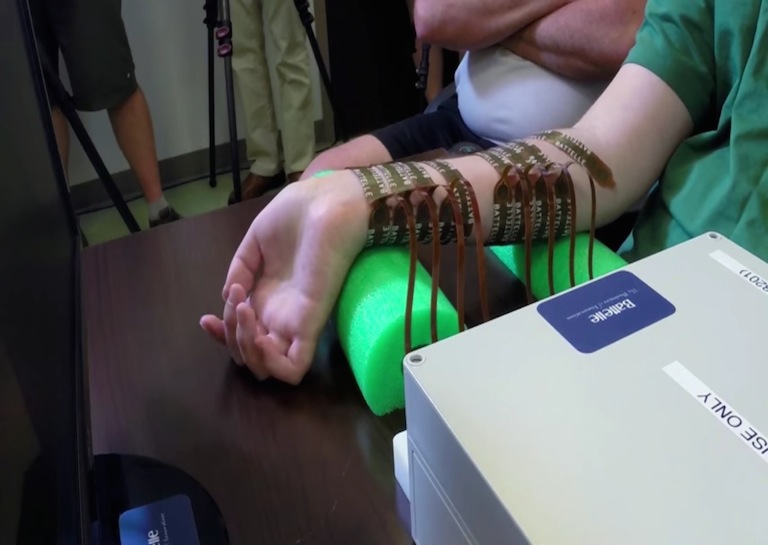 While this technology is still in its infancy, this represents a huge breakthrough when it comes to understanding how the brain functions and responds to trauma. Researchers are looking to improve the technology by possibly creating a less invasive implanted chip and even replacing the electrode sleeve with fully implantable devices. Who knows, maybe sometime in the near future, paralyzation will become a curable disorder.