Researchers have created a pill that could block connections between brain cells and an alcohol-tolerant protein called MUNC 13-1.

Each year, hundreds of millions of people around the world struggle with alcoholism. Hope might be on the horizon thanks to a protein found in the brain. Researchers from the University of Houston's College of Pharmacy have isolated the protein MUNC 13-1 and identified it as a critical factor in developing alcohol tolerance.

"Addiction to alcohol remains one of the most significant mental health problems throughout the world. A major challenge is to understand how ethanol, or alcohol, changes behavior and the brain during the descent into addiction," Das reported. Tolerance toward alcohol is one of the first steps in developing alcoholism.

In the United States alone, over 15 million adults over the age of 18 suffer from alcohol use disorder (AUD) and are prone to alcoholism. An average of 88,000 people die each year from alcohol-related deaths, and it makes alcohol the third largest cause of preventable deaths in the US. Drinking excessively has also taken a toll on the US financially. In 2010, officials noted alcohol misuse cost the country roughly $249 billion.

"If a person becomes tolerant of one drink, he will have another and maybe another. If we could stop alcohol from binding into MUNC 13-1 it will help problem drinkers in reducing tolerance. If we can reduce tolerance we can reduce addiction," said Das. Das's study focuses largely on binge alcohol exposure.

MUNC 13-1 binds with alcohol in a brain synapse when a neuron passes a signal to another 'approving' of the alcohol. More specifically, noted Das, the binding takes place in the presynaptic space -- a part of neurons rarely understudied by neurologists. During a binge (a moment of excessively high alcohol exposure), the alcohol changes neural activity, often with long-lasting changes in both the presynaptic and postsynaptic functions of the brain's neurons. 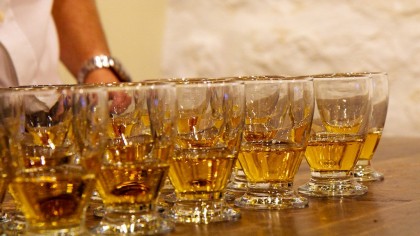 "Reduction in Dunc13 produces a behavioral and physiological resistance to sedative effects of ethanol," said Das. That makes MUNC 13-1 an important target for developing drugs. "We need to develop a pill that would inhibit alcohol binding to MUNC 13 and reduce its activity. Based on our results so far, this would likely reduce the formation of tolerance, making it harder to become addicted to alcohol," said Das.

With this information, Das wants to create a pill that inhibits MUNC 13-1 from binding with alcohol during the synapses. Thus far, the pill could successfully reduce alcohol tolerance and make patients less likely to become addicted. No word yet as to the pill's effectiveness regarding those already struggling with alcoholism.

Via: University of Houston, eNeuro