The National Institute of Allergy and Infectious Diseases could be one giant step closer to solving HIV thanks to a new vaccine set to start human trials next year.

A team of researchers with the National Institute of Allergy and Infectious Diseases (NIAID) are taking on one of the most aggressive viruses known to humans -- HIV. NIAID are in preparation to begin the first human trials for an HIV vaccine that sparked headlines due to its success with mice, guinea pigs and monkeys. 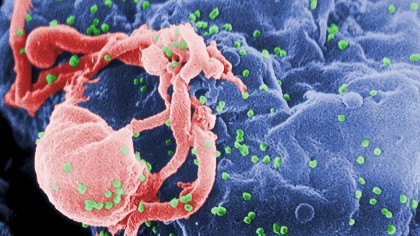 "NIH scientists have used their detailed knowledge of the structure of HIV to find an unusual site of vulnerability on the virus and design a novel and potentially powerful vaccine," said NIAID Director Anthony S. Fauci, M.D. "This elegant study is a potentially important step forward in the ongoing quest to develop a safe and effective HIV vaccine."

"Over the past several years, HIV researchers have discovered many powerful, naturally occurring antibodies that can prevent multiple HIV strains from infecting human cells in the laboratory," NIAID explained in a statement. "About half of people living with HIV make these so-called "broadly neutralizing" antibodies, but usually only after several years of infection -- long after the virus has established a foothold in the body."

"Scientists have identified and characterized the sites, or epitopes, on HIV where each known broadly neutralizing antibody binds," the team continued. "Many laboratories around the world are developing HIV vaccine candidates based on the structure of these epitopes with the goal of coaxing the immune systems of HIV-negative people to make protective antibodies after vaccination."

Researchers John Mascola and Peter Kwong led the team in discovering this potentially life-saving vaccine. The NIAID group is currently working on updating and tweaking the vaccine. They've already conducted several successful monkey trials and are using that data in order to create a more ideal version before human subjects are used by 2019.