Some of the oldest galaxies in the universe turn out to be brighter than expected, giving astronomers new insight into the conditions of the early universe.

NASA's Spitzer Space Telescope has been studying some of the earliest galaxies in the universe and has found them to be brighter than expected, shedding new light on the conditions of the early universe.

The Epoch of Reionization

Staring at some of the earliest galaxies to have formed in the universe, scientists at NASA have discovered they are brighter than they were anticipating, pointing to a possible cause of the so-called Epoch of Reionization which transformed the early universe from an opaque cloud to the transparent vacuum full of stars that we see today.

The galaxies in question were about 13 billion years old or older, making them all less than a billion years younger than the universe itself.  About 100 to 200 million years after the Big Bang, the first stars are believed to have formed which would coalesce into the first galaxies in a dense cloud of neutral hydrogen gas that filled the entire universe.

By about 1 billion years after the Big Bang, something had changed. The universe had passed through what is known as the Epoch of Reionization, where all of the neutral hydrogen atoms in the universe had been stripped of electrons, producing a universe full of ionized hydrogen. The mystery is what could cause all the hydrogen in the universe to ionize, allowing previously blocked wavelengths of light to pass, turning the universe from an opaque cloud to a sparkling firmament full of stars and galaxies.

Observing two regions of space for more than 200 hours each, NASA's Spitzer Space Telescope was able to capture the faint light from 13 billion light years away, showing some of the earliest galaxies to have formed in the universe. What the Spitzer Space Telescope saw, however, were 135 different galaxies that were significantly brighter in two specific wavelengths of infrared light, something scientists weren't expecting.

These wavelengths are produced by the interaction of ionizing radiation with hydrogen and oxygen gases within the galaxy itself. This indicates that these early galaxies were composed of young, very massive stars made mostly of hydrogen and helium with very little of the heavier elements such as nitrogen, carbon, and oxygen that we find in the stars of the average modern galaxy. 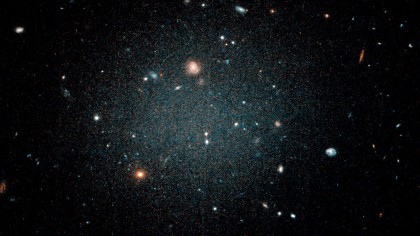 While not entirely conclusive, this observation of brighter than expected ancient galaxies blazing with ionizing radiation offers an important clue as to how the Epoch of Reionization played itself out over hundreds of millions of years.

"We did not expect that Spitzer, with a mirror no larger than a Hula-Hoop, would be capable of seeing galaxies so close to the dawn of time," said Michael Werner, Spitzer Space Telescope project scientist at NASA's Jet Propulsion Laboratory. "But nature is full of surprises, and the unexpected brightness of these early galaxies, together with Spitzer's superb performance, puts them within range of our small but powerful observatory."

The study of these ancient galaxies was published last month in the Monthly Notices of the Royal Astronomical Society.