An ambitious green energy park has been proposed by a consortium of leading U.S engineers and scientists as an alternative to a security wall on the U.S/Mexico border.

A consortium of engineer and scientist have proposed an alternative to President Donald Trump’s plan to build an anti-immigration wall along the United States southern border. Instead of a wall, how about a first-of-its-kind linear energy park?

Together the stretch of utilities would be the first of its kind in the world. As well as contributing to the region economically and socially, the energy park could also provide the security a wall would; also it could provide a precious infrastructure that would have huge numbers of employers.

The connected series of green energy generators would be a huge economic boon to the region, not only as direct employers but would attract business to the area on the search for cheap energy supplies. Luciano Castillo, Professor of Renewable Energy and Power Systems at Purdue University leads the consortium; he says if created the project would have massive positive impacts on both Mexico and the U.S.

Plan could provide stability to the region

"Just like the transcontinental railroad transformed the United States in the 19th century, or the Interstate system transformed the 20th century, this would be a national infrastructure project for the 21st century," Castillo says. 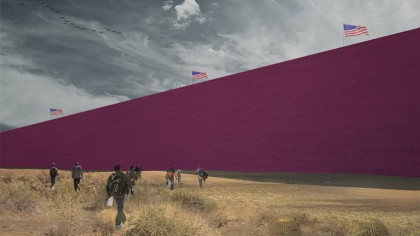 "It would do for the Southwest what the Tennessee Valley Authority has done for the Southeast over the last several decades."

Regent's Professor at Arizona State University, Ronald Adrian, says despite the initial overwhelming scale of the project it has merit and should be considered seriously by those in power.

"At first blush, the idea seems too big, too aggressive, but consider the Roman aqueducts or the transcontinental railroads—enormous undertakings that gave enormous benefits. The cost of providing basic, essential infrastructure to the borderlands is tiny compared to the opportunities it creates," Adrian says.

"I view this project as a means of creating wealth by turning unused land of little value along the border into valuable land that has power, water access and ultimately agriculture, industry, jobs, workers, and communities. With only a wall, you still have unused land of little value." Carlos Castillo-Chavez, Regent's Professor at Arizona State University, says the best way to address the ongoing border issue is the collaboration between the two countries.

"They know that solutions must address these challenges across both nations. There are no effective single-territory solutions."