The wings of a butterfly may offer more than just cool optics. Recently, researchers have discovered the wings of the Morpho didius could be used to save lives.

Some of the most impressive feats in design and technology took inspiration from the nature around us. Though the idea of learning from nature, rather than taking from it, has been formalized as "biomimicry" rather recently, the idea has existed since the beginning of mankind. Janine Benyus Cofounder of the Biomimicry 3.8 summarizes biomimicry perfectly stating, "Biomimicry [is] innovation inspired by nature. In a society accustomed to dominating or "improving" nature, this respectful imitation is a radically new approach, a revolution really. Unlike the Industrial Revolution, the Biomimicry Revolution introduces an era based not on what we can extract from nature, but on what we can learn from her. "

Biomimicry has had an impact on some of your household products as well as the tools used in the world. Researchers have continued this trend, and have turned to nature again to solve real-world biotechnical problems. More recently, scientists have used the butterfly wing as a way to detect dangerous weaponized chemicals

Butterflies are fascinating creatures. Their beauty alone draw the interests of biologists as well as renown artists. Maybe it is the whole caterpillar story, but butterflies have managed to mesmerize culture. Researchers have made a huge effort to study the most impressive, and vibrant feature of the butterfly, its wings. 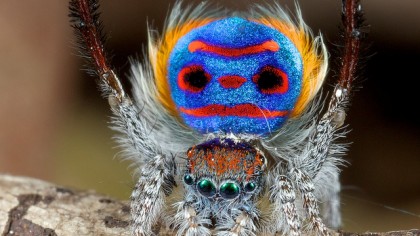 The star of the study is the blue stunner, the Morpho didius species of the butterfly. While studying this butterfly, researchers discovered that the same photonic crystals that give the Morpho its blue color can be used to detect chemical agents.

If you were able to catch a glimpse of this stunning butterfly in the wild, you would notice that the butterfly looks vibrantly blue at certain angles, while if you might change your position the butterfly may not look blue at all. This is due to the presence of the photonic crystals and the way they refract light. Using these light scattering properties you would be able to pick up chemical vapors that might be hazardous to humans or soldiers on the battlefield.

Let Nature Be Your Guide

Using the photonic crystals from the butterfly, scientists were able to test the ability to detect vapor agents, however, they were not able to detect the chemical to the degree they wanted to. The Photonic crystals "could only detect chemical agents in the parts per million range", but only when a chemical concentration is high enough to be lethal to humans. But no worries, with these butterfly crystals, scientists aim to design something even better. The tools created with this butterfly could be something that saves the lives of soldiers as well as civilians that under threat of chemical warfare.

Via: Cosmos, Biomimicry Institute, American Council on Science and Health