Buzz Aldrin: Life and Career of One of the First Men Who Walked on the Moon

Buzz Aldrin, who walked on the Moon in 1969 as part of the Apollo 11 mission, envisions a long-term permanence on Mars by 2035.

On July 20, 1969, astronauts Edwin "Buzz" Aldrin and Neil Armstrong walked on the Moon for the first time in the history of mankind. Over half a billion people around the world watched the landing of NASA's Apollo 11 on the Moon.

Buzz Aldrin and Neil Armstrong explored the Sea of Tranquility region of the Moon while astronaut Michael Collins remained with the command and service modules in lunar orbit. It was the first manned mission ever.

One giant leap for mankind

On July 16, 1969, the Saturn V launch vehicle (SA-506) for the Apollo 11 mission liftoff at 8:32 am CDT from launch complex 39A at the Kennedy Space Center. Apollo 11 was the first manned lunar landing mission representing a milestone in space exploration.

Apollo 11 carried a crew of three astronauts: Mission commander Neil A. Armstrong, Command Module pilot Michael Collins, and Lunar Module pilot Edwin “Buzz” E. Aldrin, Jr. Apollo 11 placed the first humans on the surface of the Moon on July 20 and returned them back to planet Earth on July 24.

Objectives of the Apollo 11

The Apollo 11 mission was a national goal set by President John F. Kennedy on May 25, 1961: Perform a crewed first lunar landing and return to Earth. 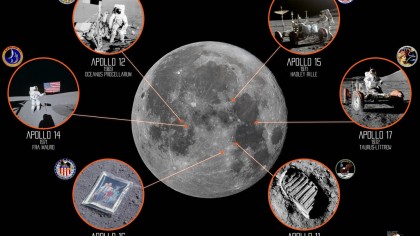 The two astronauts gathered samples of lunar-surface materials and also extensively photographed the lunar terrain, the deployed scientific equipment, the LM spacecraft, and each other, both with still and motion picture cameras.

This was to be the last Apollo mission to fly a "free-return" trajectory, which would enable a return to Earth with no engine firing, providing a ready abort of the mission at any time prior to lunar orbit insertion.

Once on the Moon, one of the tasks of astronaut and lunar module pilot Buzz Aldrin was to deploy two components of the Early Apollo Scientific Experiments Package (EASEP) on the surface of the Moon during the Apollo 11 extravehicular activity.

Buzz Aldrin carried and positioned the Passive Seismic Experiments Package (PSEP) and the Laser Ranging Retro-Reflector (LR3) on the lunar surface. The photo below was taken by mission commander Neil Armstrong with a 70mm lunar surface camera to document the historical moment.

When the crew of the Apollo 11 returned to Earth, the astronauts had to remain in a mobile 21-day quarantine. This process was required in order to protect against any possibility of lunar contagion.

It was later discontinued after the Apollo 14 mission. Below, the astronauts patiently try to keep their high spirits during the quarantine.

From the Earth to the Moon: Buzz Aldrin's life and career

Edwin Eugene Aldrin Jr. was born in Montclair, New Jersey, on January 20, 1930. "Buzz," his nickname, became his legal first name in 1988. When he was a child, the younger of his two elder sisters mispronounced "brother" as "buzzer", which was shortened to Buzz. Ever since, he has been better known as Buzz Aldrin.

"When I returned to earth I became a celebrity, a hero, with ticker tape parades and speeches, but that's not really what I looked for or desired." - Buzz Aldrin

He is an American engineer, former astronaut, and Command Pilot in the United States Air Force. He was the Lunar Module Pilot on the Apollo 11 mission, the first manned mission to the Moon. Buzz Aldrin and mission commander Neil Armstrong were the first two humans to land and walk on the Moon. Fun fact: Buzz Aldrin was the first human to urinate on the Moon.

One of Buzz Aldrin's first missions was on Gemini 12, where he spent over five hours outside the spacecraft. This successfully proved that extravehicular activity (EVA) could be performed by astronauts.

In October, 1963, Buzz Aldrin became an astronaut during the selection of the third group by NASA. On November 11, 1966, he orbited aboard the Gemini XII spacecraft, a 4-day 59-revolution flight that successfully ended the Gemini program.

During Project Gemini, Buzz Aldrin became one of the key figures working on the problem of rendezvous of spacecraft in Earth or lunar orbit, and docking them together for spaceflight.

Former U.S. President John F. Kennedy had set a goal to send the first men on a mission to the Moon before the end of the 1960s.

Buzz Aldrin was chosen as a member of the three-person Apollo 11 crew. Fulfilling the mandate of President Kennedy, they landed on the Moon on July 20, 1969. Neil Armstrong and Buzz Aldrin were the first Americans and first humans to set foot on the lunar surface.

Landing the first man on the Moon

On May 25, 1961, in an address to the United States Congress, John F. Kennedy commits to "landing a man on the Moon and returning him safely to the Earth," urging the necessity of funds.

We choose to go to the Moon

On September 12, 1962, John F. Kennedy delivered a speech at Rice University where he set the goal of the space race in the 1960s. Unfortunately, President John F. Kennedy could not see his dream come true. He was tragically assassinated on November 22, 1963.

In 1985, Buzz Aldrin proposed the existence of a special spacecraft trajectory system that makes travel to Mars possible using less propellant than conventional means. His system, known as the Aldrin Cycler, proposes an expected five and a half month journey from the Earth to Mars, and a return trip to Earth of about the same duration on a twin-cycler. Buzz Aldrin and engineers from Purdue University continue to research this concept.

In 2016, Buzz Aldrin was medically evacuated from the South Pole and taken to a hospital in New Zealand after he fell ill during a tourism adventure to Antarctica. During his recovery in New Zealand, he had an unexpected bedside visit from NASA Deputy Administrator Dava Newman.

The dark side of the Moon

Buzz Aldrin has repeatedly reported a strange light he saw in 1969 when he was standing on the lunar surface. He referred to what he saw as "technically an unidentified flying object (UFO)."

Buzz Aldrin revealed the existence of a monolith -a single piece of stone- on Phobos, one of the two moons of Mars. On July 2009, Aldrin referred to the Phobos monolith: "We should go boldly where man has not gone before. Fly by the comets, visit asteroids, visit the moon of Mars. There's a monolith there. A very unusual structure on this potato shaped object that goes around Mars once in seven hours. When people find out about that they're going to say 'Who put that there?' The universe put it there."

Magnificent desolation is how Buzz Aldrin described the Moon back in 1969 during his moonwalk. He used this particular description as the inspiration for his second autobiographical book: Magnificent Desolation, where he talks about human long-term permanence on Mars and an international base on Mars.

Forty years later, in 2009, Buzz Aldrin talked in an interview about his deepest feelings after coming back from the Moon, how life and relationships change, and the problems he and the other two members of the Apollo 11 encountered when returning to their normal lives. He bravely talks about his personal feelings, thoughts, and vulnerabilities when faced with depression. Perhaps, he refers to a sudden striking feeling of magnificent desolation after returning from the Moon.

2019 marks the 50th anniversary of Apollo 11. Road to Apollo 11 50th Anniversary, sponsored by Buzz Aldrin Ventures is preparing celebratory events to commemorate one of mankind's greatest achievements: landing on the Moon.

Presently, Buzz Aldrin dreams to bring countries together to continue space exploration together as a united planet, and he presents a thoughtful case about long-term permanence on Mars by 2035.

He describes Moon "not as a destination but more a point of departure, one that places humankind on a trajectory to homestead Mars and become a two-planet species."