The CAKE Kalk& (and) is a gorgeous new addition to the electric motorcycle scene.

CAKE, the Swedish manufacturer of electric motorcycles, has announced its first street legal bike for US and EU roads, the Kalk& (and).

New Addition to the Kalk Line

The Kalk& (and) was introduced at the Outdoor Retailer Snow Show in Denver, Colorado last month and expands on the Kalk platform which already includes the Kalk OR.

Final specs, price, and availability will be released in March, while pre-order fees for the bike will be 200 EUR or USD, depending on where you're shipping to, and will probably sell for around $13,000—the current price of the other bike in the Kalk line, the Kalk OR. The Kalk& (and) is closely modeled on its sibling, an off-road electric bike released last year.

The Kalk OR has a 51.8-volt, 2.6-kWh battery, Öhlins front and rear suspensions, a top speed of around 46 mph, and a range of about 48 miles. It can be charged using a standard outlet, and it takes about 2.5 hours to get a full charge.

The Kalk& (and) will probably feature similar specs, but it will be built for road use, so its top speed will reportedly exceed 60 mph, making it suitable for highways.

Built From The Ground Up For The Road

While sharing many similarities with its sibling, the Kalk OR, the Kalk& (and) necessarily had to be redesigned for the road. This means all of its component parts had to be built and designed specifically for the street. According to a statement put out by CAKE, “Each component of the Kalk& (and) had to be developed from scratch to support the category. 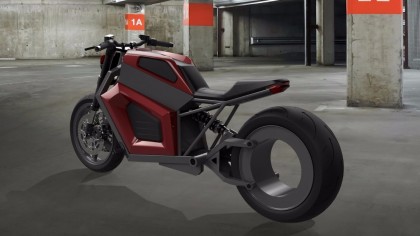 “Every part of the Kalk& (and), including rolling chassis – frame, cockpit, wheels and tires – components, suspension and drive train, was engineered, designed and manufactured for optimal performance.”

The goal, according to the company, is to build a bike that has the performance and handling to go off-road and then be able to ride that same bike home on the highway.

“The benefits of the dual usability, combining sustainable and efficient commuting with backcountry exploration, are endless,” says Stefan Ytterborn, the founder and CEO of CAKE.

“Bringing a high performance, electric off-road bike to the market, and making it street legal, is an important step for us at CAKE, inspiring people towards zero emission, combining responsibility and excitement. It’s the perfect commuter tool, while serving its users with thrill and fun, during weekends and vacations.”

What’s in a Name?

The Kalk& (and) name itself points to where the company hopes to take this bike when it’s released later this year. “The addition of the & (and) signifies the next phase in the evolution of the Kalk. Engineered for both the outback & allowed for your daily commute, the Kalk& (and) offers customers the best of both worlds,” the company said.

The sales launch of the CAKE Kalk& (and) will occur later this year, but for now, the company is heading to Munich to show off the bike at the ISPO later this month.