Los Angeles was once nothing more than a forest of derricks leaching oil. Although the country has since evolved into an entertainment metropolis, its booming oil industry has not vanished, it has simply hidden from the public's eye.

Many would wrongfully assume the once-booming oil industry in Los Angeles (L.A.) has dissipated, but even to this day, the oil fields in L.A. continue to extract oil from beneath Californians' feet. At a time, L.A. was nothing more than a forest of derricks, and while most of the oil wells have since moved offshore, sequestered away in-between the thriving cities still remain many derricks which continue to mine the oil wells within the city's borders.

The derricks are camouflaged and sound-proofed, and now, Los Angeles County residents have learned to live beside these oil production facilities. There are a few oil wells throughout the cities within Los Angeles County which discreetly operate behind counterfeit bell towers and buildings, while others have simply been retrofitted with modern art.

How the Hidden Oil Industry of Los Angeles Came to Be

Preceding the boom of the oil industry in the late 1800s, Native Americans used oil from tar sands as a waterproofing compound for boats and buckets, as well as to fashion knives, arrows, and other tools.  But since the 1800s, the discovery of other practical and commercial applications of oil quickly lead to the wildly renowned oil boom. 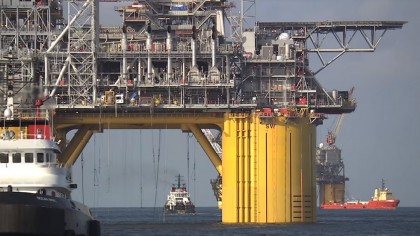 It is uncertain when humans first came upon oil, however, Spanish explorers have noted oil seeps around Los Angeles dating back as far as 1543. But due to a lack of records, Edward L. Doheny, Sr. is credited with discovering the first Los Angeles oil field in 1892. The original oil field sits near the present-day Dodger stadium.

Understanding the implications oil would soon carry, Doheny quickly began construction on the oil field. His well reached 140 meters into the earth's crust within its first year of operation it was producing about 45 barrels a day. His prospects would lead him to become one of the wealthiest men in America.

The oil boom began and sparked one of the largest major land growths the city would experience. Within the first two years of Doheny's initial well, 80 other wells were constructed to exploit the oil-rich grounds. In the second year of production, more than 750,000 barrels of oil had been extracted, bringing California's total oil exports in excess of 1 million barrels.

After a little more than 5 years,  more than 200 oil companies were extracting oil from 2500 wells within the county limits. By 1930, California was contributing nearly one-quarter of the world's oil production.

In the 1890s, Los Angeles was still in its infancy with a population amassing to merely 50,000 inhabitants. But entering 1930, the town had grown into a city, with more than one million residents then calling it home.

On a postcard photo traced back to 1903-04 from the Detroit Publishing Company portrays a still image of an unidentified landscape in Los Angeles, California, riddled with derricks. Titled “An Oil Well In Every Yard”, the picture depicts an area of the city with houses surrounded by trees and oil wells.

“The history of Los Angeles is intertwined with the use and production of gasoline and oil,” noted an article from the Center for Land Use Interpretation, Culver City, California. “Everyone thinks of Los Angeles as the ultimate car city, but the city’s relationship with petroleum products is far more significant than just consumption.”

Leading into the 20th century, L.A. was quickly transforming into a city of entertainment. Population expansion and modernization of the region forced many of the mining operations out of the inner city. But not all oil production facilities would move out.

Within Los Angeles country inside the city of Beverly Hills still stands a derrick which continued to extract oil until 2017 when a bankruptcy drove the company, Venoco Inc, out of business.

The derrick, known to many as the "Tower of Hope" remained in operation for decades, even as the city surrounding it expanded. It was only a few years ago under heavy scrutiny of public safety that the well was, metaphorically, driven into the ground.

Despite the termination of one well operating merely meters away from residential housing, other wells continue to extract oil from close proximity to residential areas.

Occidental Petroleum built the Cardiff Tower drill site with the intention to operate while also blending the ugly site into the background of the city. The aesthetics and appearance of the tower were highly praised by the mayor of Los Angeles at the time, calling it “an outstanding contribution to civic beauty.” Eventually, the site was sold in 1998 to Breitburn Energy and still operates approximately 40 active wells to this day.

Located on 5733 W. Pico Blvd in Los Angeles, California, lies another drill site that operates inconspicuously within the city. The Packard Drill Site was built in 1968, two years after the Cardiff Tower drill site. Despite its lack of windows and open-roof structure, the building (street view below) operates comfortably and resembles a normal office building versus its actual origins as one of the oldest operating sites, with Freeport-McMoRan company responsible for its 51 current active wells.

The well was fitted behind a false building designed to disguise the well into the surrounding area. The building has no windows, and from above, no roof. It is purely designed to be hidden from the public eye.

The wells are a juxtaposition between the oil industry and living communities. Collectively, they portray a clear example of the contrasting shift multiple regions within L.A. faced as the country progressed from industry to entertainment. Areas that were once famous for their multitude of derricks began accommodating for community infrastructure and overall modernization.