Cities around the world are trying to ban cars from urban areas as traffic congestion take a toll on our health and environment. Are Deep Roads the answer?

With the number of vehicles on the road around the world expected to grow to over 2 billion by the 2040s, traffic congestion on roads will worsen to significant degree. Producing 20 percent of all air pollution, gas-burning vehicles increasingly threaten the air quality and the health of people living in the affected areas. As construction projects seek to expand roads to accommodate the increase in vehicles, more of our open spaces will need to be given over to roads or rail lines, lessening the quality of life for citizens everywhere, and don't even really alleviate traffic congestion. If drastic steps need to be taken, could Deep Roads be the answer?

In cities around the world, citizens have taken the drastic step of banning road traffic through urban centers entirely. So far, among major cities struggling with congestion, Europe has been the clear leader on the car-free city center.

Paris has instituted similar restrictions on gas-powered cars, and the city’s mayor, Anne Hildago, has declared that cars of any kind are banned from the city’s urban core on the first Sunday of every month.

Oslo, London, and Brussels have all rolled out similar programs. In Rome, the air quality from vehicle pollution is so bad that it’s beginning to erode some of the city’s most famous monuments. A report in Bloomberg reports that “3,600 stone monuments and 60 bronze sculptures might seriously deteriorate due to air pollution.”

It isn’t just European cities though. Mexico City has tried various programs to curb its air pollution problem, once the worst in the world. As one of the most populated cities on the planet, Mexico City is especially plagued by traffic congestion as well.

New York City is ahead of its US counterparts by creating pedestrian-only areas in famous, well trafficked areas like Times Square, and Mayor Bill de Blasio announced last year that cars would be banned from the roads inside Central Park.

“This park was not built for automobiles," Mayor de Blasio said last year when announcing the ban. "It was built for people."

The Health Consequences of Traffic Congestion

There is genuine value in living in a congestion-free environment for its own sake, but more than anything, eliminating the traffic congestion from gas-powered vehicles also has considerable health benefits for the population in the affected area.

On a non-congested road, vehicles can cruise through an urban area at the top allowable speed, momentarily polluting the populated areas it passes, but then it’s gone and the pollution disperses, limiting its acute impact on any one person. As congestion increases, however, cars must move slower, allowing them to spend more time in populated areas polluting the air.

Heavy congestion also produces different driving behavior, with a lot of starts, stops, and varying rates of acceleration and deceleration requiring vehicle engines to burn gasoline and diesel fuel at a greater rate than if vehicles were able to simply cruise at higher speeds.

A 2010 study [PDF] estimated that the cost associated with congestion-related mortality in 83 US cities in 2000 was $31 billion. As the balance of the population continues to shift away from rural and suburban areas and towards major urban centers in the US, there are more people packed into the affected areas even as the number of vehicles on the roads increases. These costs are only going to grow.

Can Deep Roads Solve the Problem?

Banning cars from urban spaces may make cities much more livable, but this is an especially urban-centric perspective. Banning vehicles from urban centers simply reroutes vehicle traffic that is necessary for commuting or commercial purposes further out into outlying areas, largely in poorer communities whose political power is not sufficient to prevent this change in traffic patterns.

To accommodate the increase in vehicle traffic on the roads, existing highways and freeways are often expanded, but this apparently simple fix doesn’t actually reduce congestion—it increases it, something economists call induced demand. Essentially, if you build more roads, people who hadn’t considered driving before because of traffic will start to drive more because of the increased capacity, which leads to even greater congestion.

There are some interesting alternatives to this model of road expansion, including one by a pair of Professors at the University of Nottingham that they call Deep Roads. According to Saffa Riffat, President of the World Society of Sustainable Technologies and Fellow of the European Academy of Sciences, and Yijun Yuan, an EU Marie Curie Fellow, the idea is fairly straight forward; if infrastructure expansion will only increase the number of vehicles on the road, why not just bury the roads?

Their idea is that rather than digging a traditional tunnel or highway system to alleviate congestion, Deep Roads can be built by removing the soil to form shallow channel a few meters underground that would serve as a roadbed, then prefabricated pieces built off-site could create the walls and the roof over the road.

This roof surface can then be used for electric vehicles, pedestrian traffic, or other open spaces. As an enclosed space, the vehicle emissions can be extracted, captured, and processed so they don’t contribute to above ground air pollution.

There would definitely be challenges in more urban areas with such a system, since the only way to use a system like this effectively would require replacing the existing roads, but also a very real need in those cities because those roads are fairly narrow and there isn’t room to expand the roads because of existing buildings.

Another problem with that is that nearly all of a city’s utility infrastructure, such as gas lines, telecommunication cables, and even power lines, all run underneath city streets like arteries, feeding off into buildings along the road like capillaries in the human body. All of this infrastructure would need to be moved further underground to accommodate a Deep Road. 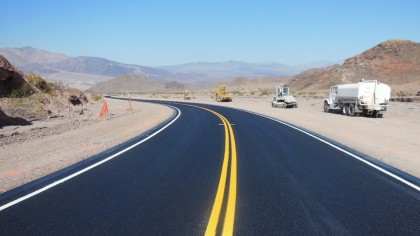 The upfront costs of such a project make it a big lift, but such a system actually serves two important functions at once. By helping reduce pollution, Deep Roads can help combat climate change while giving the population back more of the ground level public space that it has lost to vehicle traffic over the last hundred years.

Such a system would work better for drivers too, since they could regain direct access to city centers that they are currently having to surrender. In some cases, such as freeways in suburban areas, similar to designating “car pool” lanes on highways now, these ground level surfaces over Deep Roads could be reserved for fully electric or emissions free vehicles to encourage their quicker adoption by the public.

While it might seem like an impossible task to completely rebuild our road systems with Deep Roads or something similar, the US Interstate Highway System wasn’t much different when it was built. There was a lot of developed property in the way of these routes and while they tried to minimize the disruption they caused, they found a way to build the system even as it was a major burden on those whose lives were disrupted.

It was an enormous investment of resources and man-power that could just as easily be subjected to the same criticisms as something like Deep Roads, it's just that the economic benefits of the US Interstate Highway System so obviously outweigh those initial upfront construction costs and disruptions that no one could make the claim that the system was too expensive and shouldn't have been built seriously.

If we are serious about tackling the challenges to health and the environment that gas-powered traffic congestion produces, then we need to think about systemic transformations, not piecemeal fixes. Whether or not Deep Roads or some similar setup is technologically feasible in the near term, its a plan on the table and the cost of building out such a system pales in comparison to what it will cost us down the road as climate change turns into a global climate crisis.

Is climate restoration the key to stopping climate change?