Can VR be an Empathy Engine?

New research suggests there is a connection between VR and empathy.

While the biggest draw of virtual reality is the prospect of living out the experience of another person or entity, new research suggests that there might be a much more substantial link between VR and empathy than people might realize.

A new VR experience developed by Stanford University researchers called “Becoming Homeless” is demonstrating that VR experiences might have a more profound impact on our psyche than other forms of media when it comes to “putting ourselves in someone else’s shoes.”

Meanwhile, a project called the Machine to be Another aims to have participants see through the eyes of another person as that person mimics their behavior in real time to study how we perceive ourselves—and others.

Some artists and documentarians are even taking to VR to build movies and experiences to bring to people the experiences of marginalized persons, as the film Clouds Over Sidra that puts you inside a refugee camp for Syrian refugees in Jordan.

In the Stanford VR Project “Becoming Homeless”, participants lived out the experiences of people who were faced with homelessness.

Published in PLOS ONE, the study was conducted over two separate two-month long studies with more than 560 participants from diverse ethnic backgrounds, aged as young as 15 and as old as 88.

Developed by Standford’s Virtual Human Interaction Lab, “Becoming Homeless” aimed to explore whether seeing homelessness from another’s eyes through VR made a person more empathetic to the plight of the homeless. 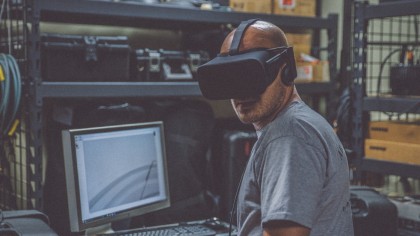 Participants who underwent the VR experience were found to be more inclined to have lasting sympathy for homeless persons than those who experienced homelessness through other media, such as reading about it, or even a 2D representation of the exact same scenario on a desktop computer.

“Taking the perspective of others in VR produces more empathy and prosocial behaviors in people immediately after going through the experience and over time in comparison to just imagining what it would be like to be in someone else’s shoes,” one of the study’s authors said.

“And that is an exciting finding.”

Machine to be Another

In Machine to be Another, an Oculus Rift was set up so that it would receive input from a video camera attached to a person, who would then mimic what a participant did while sitting in a chair while wearing the Rift.

The aim of Be Another Lab, the group behind the project Machine to be Another was less to reconstruct the participant in another body, or to transport the participant, but instead to “explore how the boundaries of the ‘self’ can be manipulated and perhaps expanded.”

The idea was to see how participants would react via what are known as “mirror neurons,” or neurons that fire both when someone acts or when someone sees another perform that same action. This is what is thought to be at work when we see someone in pain.

Someone can tell you that their relative has cancer and you might be sympathetic, but watch someone give themselves a papercut and you are likely to actually feel the injury in the form of a “cringe.”

The project itself involves blindfolding the participant and sitting them down before fitting them with the Oculus headset. Instructed to move slowly and deliberately, the subject opens their eyes and is presented with a body that is not their own.

By mutual consent, the “performer” and the participant engage in a form of pantomime that hopes to challenge the participant’s own perception and their sense of self.

Ainsley Sutherland,  the author of an MIT case study on the project, is not entirely convinced of the VR’s ability to increase empathy.

She writes, “my experience of an assemblage of the visual and haptic experience of another is putting me in their place, but not actually in their body. And this is the central critique of VR as a successful medium for ‘increasing’ empathy: that it cannot reproduce internal states, only the physical conditions that might influence that.”

One of the most exciting developments in VR media is how the VR experience might be used by traditional storytellers. One such story is Clouds Over Sidra, a completely VR experience that follows the story of Sidra, a 12-year-old girl living in the Za’atri refugee camp in Jordan.

Produced in part with the support of the United Nations, Clouds Over Sidra aims to demonstrate to the participant the lived experience of Syrian refugees displaced by conflict.

The hope is that by making a deeper connection with the participant than would otherwise be possible through traditional media, much-needed relief for refugees will be more forthcoming.

Evidence from fundraising events where Clouds Over Sidra has been shown show that people have responded positively to the experience.

In 2015, at a fundraising conference that included a viewing of Clouds Over Sidra raised $3.8 billion, more than 70% over what conference organizers had hoped to raise.

UNICEF reported that a program where donors watched Clouds Over Sidra, saw one in six people pledged to donate, twice the rate they were expecting.

The implications for philanthropy is significant and it appears to hinge on the capacity for VR to build empathy between the subject and the participant.

“We’ve been referring to virtual reality as the ultimate empathy machine,” says California-based Vrse.works, the production company that worked with the UN to produce the video, “These films can help donors understand the everyday reality of ordinary people caught in the middle of conflict [and] can help form policies and raise funding.”

Much more research needs to be done before anyone can say for certain whether VR is better than other media at inspiring empathy, but early research is promising and real-world application of VR media is already appearing to bear fruit.

With the rapid expansion of VR technology into the marketplace, we can only hope that the research between VR and empathy continues to be positive and that the technology can actually be a force for good and help create a more compassionate world.