Effective immediately, recreational drone users can face a fine of $3,000 ($2,248 USD) for drones weighing more than 250 grams (0.55 lbs) if they're caught: flying higher than 90 meters (295 ft), more than 500 meters (1,640 ft) away from its user, at night or somewhere lacking visibility, without the user's name, address and phone number marked on the drone and over emergency response scenes or controlled airspaces. Transport Canada tweeted a full list below: 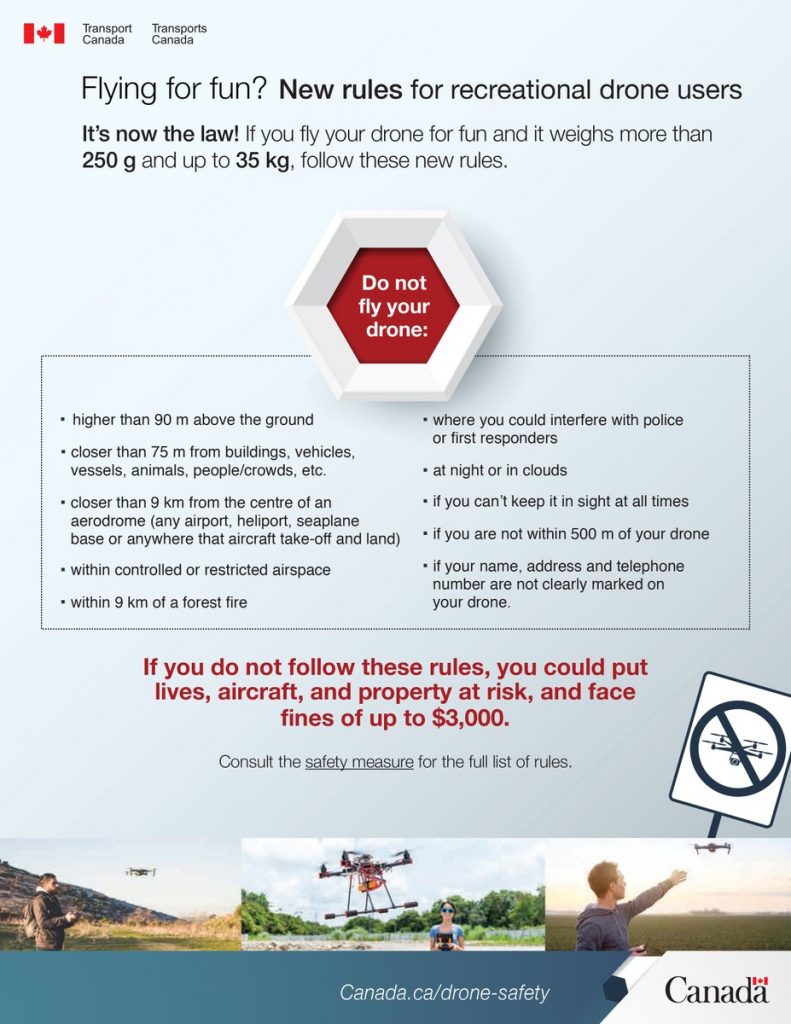 These regulations are meant to manage the types of calls that police receive regarding drones. RCMP Chief Supt. Brian Stubbs said that prior to the new rules, police had to deal with drone issues as criminal negligence.

"These regulations will give us a [less harsh] way to manage these types of calls," he said. "Of course discretion is a part of this as well too. Police officers have the discretion just to educate, perhaps, an operator of a drone, all the way to [using] the Criminal Code."

Within the last year, Transport Canada saw an increase regarding drone safety calls. The number nearly doubled between 2015's 85 calls to 2016's 148.

"I believe that we have to strike the right balance between encouraging the drone industry, but doing it responsibly," Garneau said.

Most of the rules make sense, especially with regard to air traffic and emergency scenarios.

"As drones grow in popularity, we need to work closely together to ensure that our skies remain safe for aviation activity while keeping communities safe from collateral harm," said Mark Laroche, the airport authority's president and CEO.

However, a number of Canadian users called out the drone restrictions for completely hindering urban drones. A new regulation says punishment can occur if the drone flies within 75 meters (246 ft) of buildings, vehicles, vessels, animals or people. This also means drones cannot be used in Victoria due to float planes.

Others have noted that the "animals" portion makes flying even in rural areas difficult:

@Transport_gc this basically makes it nearly impossible to fly it anywhere? can't fly closer than 75m from an animal, do squirrels count??

And then there's the excellent point that the fines incurred by drone users don't add up on top of the cost of some of the safest drones:

@Transport_gc @MarcGarneau I fly my drone with safety always first I paid over $2000 for #phantom4 now this new law pretty much makes me to have to get rid of it !

Drone manufacturers said they didn't anticipate such strong language in the new rules.

"I’m very surprised," Brendan Schulman, the head of policy at DJI, the world’s largest drone manufacturer, said in an interview with Recode. "There was no consultation with any relevant stakeholders before this announcement was made."

The rules might be some of the harshest in the world. The fines alone nearly double that of the strictest punishments in the U.S. where the top fine maxes out at $1,414.

For more information, visit the Transportation Cabinet website here. Interested in what your country's drone restrictions are? Want to see how they stack up against another part of the world? Check out this list from UAV Coach to see the specifics.