Canada's Bombardier Is No Longer a Commercial Aviation Company

Canada's Bombardier has exited the commercial aviation business with the sale of its regional jet business to Mitsubishi Heavy Industries.

By  Marcia Wendorf
Jul 19, 2019
Learjet in the sky GordZam/iStock

This past June, and a week after the biennial International Paris Air Show, Canada's Bombardier announced it was selling its regional jet business to Japanese manufacturer Mitsubishi Heavy Industries for $550 million. This divestment marked the last of a long string of acquisitions and divestments that was Bombardier.

Born Out of Tragedy

Bombardier was born out of tragedy when in January 1934, deep snow prevented mechanic Joseph-Armand Bombardier from getting his two-year-old son to the hospital in time to save his life. In his workshop in Valcourt, Quebec, Bombardier set out to design and build a vehicle that could "float on snow" and he came up with the world's first snowmobile.

In 1957, Bombardier created the "Ski-Dog," which was meant to replace a dog sled for hunters and trappers. When a mistake was made on its paint job, the "Ski-Doo" was created.

In 1964, Joseph-Armand Bombardier died unexpectedly, and in 1968, the inventor of the jet ski, Clayton Jacobson II, licensed his patent to Bombardier for the creation of the "Sea-Doo" jet ski.

In 1986, Bombardier acquired Canadair for C$120 million, and in 1989, they acquired the Short Brothers aircraft manufacturing company in Belfast, Northern Ireland.

This was followed a year later with the acquisition of bankrupt U.S. company Learjet, who manufactured business jets in Wichita, Kansas. In 1992, Bombardier acquired the Boeing subsidiary de Havilland Aircraft of Canada.

By 2008, Bombardier was making the popular Dash 8 Series 400, the CRJ100/200/440, and the CRJ700/900/1000 lines of regional aircraft, but demand was dropping. The company began devoting most of its commercial aircraft Research and Development budget to its newest CSeries.

The CSeries was intended to compete with the Airbus A318 and A319, the Boeing 737-600 and -700, and the Embraer 195. Bombardier claimed that the CSeries would burn 20 percent less fuel per trip than its competitors. 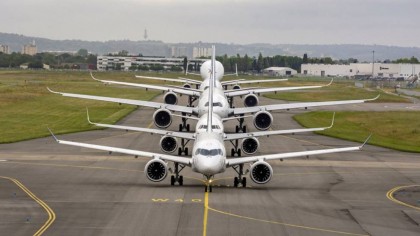 As the development of the CSeries program dragged on and on, Bombardier's fortunes dropped. By late 2015, the company's debt had reached approximately $9 billion and their shares fell 17.4 percent.

On December 18, 2015, the 110 – 125 seat CS100 version of the CSeries received its type certification from Transport Canada, but the long and expensive development process had cost US$5.4 billion, including a US$3.2 billion writeoff.

The War With Boeing Begins

In April 2016, Delta Air Lines, who is known as a shrewd buyer of planes, placed an order for 75 CS100 series models, with an option for 50 additional aircraft. In June 2016, Air Canada also placed an order for 45 CS300s with an option for another 30. The next day, Bombardier delivered the first CSeries aircraft to Swiss International Air Lines, which was the first to start flying the planes.

On September 26, 2017, The Boeing Company complained to the U.S. International Trade Commission (USITC) that Bombardier was selling the CS100 to Delta Air Lines below cost due to a subsidy from the government of Canada. The U.S. Department of Commerce slapped a whopping 292 percent tariff on the aircraft.

In retaliation, the governments of Canada and the United Kingdom threatened to stop ordering Boeing aircraft. In January 2018, the U.S. International Trade Commission overturned the tariffs, and Boeing did not appeal that decision.

On October 2017, Bombardier and Airbus announced a partnership on the CSeries program. In July 2018, Airbus acquired a 50.01 percent majority stake, with the CSeries now being marketed by Airbus as the Airbus A220. The plane is still being manufactured in Québec, with a second assembly line at the Airbus Mobile factory in Alabama.

By June 2019, with the Q400 and CSeries essentially gone, all that remained of Bombardier's commercial aviation was the CRJ program. It was that program that was sold to Mitsubishi on June 25, 2019. The CRJ planes will be folded into what was formerly the Mitsubishi Regional Jet (MRJ) program, which has now been renamed the SPACEJET.