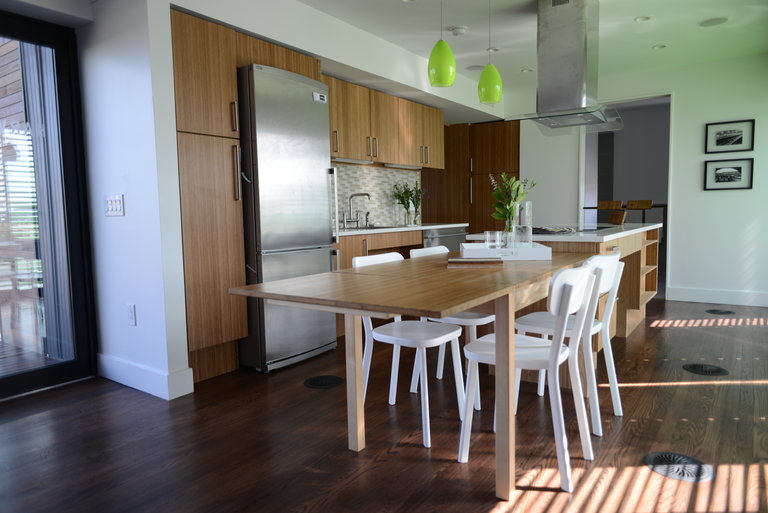 Reid’s Heritage Homes is a Canadian company that is helping to build zero carbon homes (officially called Net Zero Homes) in the country, along with four other housebuilders (Minto, Mattamy Homes, Provident and Construction Voyer) selected by Ministry of Natural Resources Canada (NRCan). The aim is to build homes that produce as much energy as the average user consumes, largely through the incorporation of renewable energy generation technologies such as solar panels and by constructing the home in such a way that it improves the air sealing qualities of the building and increases its overall energy efficiency.

The project is part of the ecoENERGY Innovation Initiative (ecoEII) which received funding in 2011 and involves a comprehensive suite of research and development (R&D) demonstration projects. The aim of the initiative is to support energy technology innovation in order to generate cleaner energy. It is a key component of the Canadian government’s attempt to achieve real emissions reductions while maintaining the country’s economy and generating jobs.

In June this year, NRCan partnered with Owens Corning in order to test the objective proposed by the American Association of Architects that by 2030 all homes should be built as Net Zero Homes. Such homes have actually existed for years, but only as sporadic, custom-built projects. The ecoEII project aims to provide them for the mainstream public. NRCan also insisted that the buildings should use products accessible to the average builder.

A minimum of 25 Net Zero Homes will be constructed in four provinces by five building companies, including Reid Heritage Homes, which will build five dwellings in Southwestern Ontario. These will be located in Westminster Woods Community in the city of Guelph and the first of them has already been built, in May this year and has just been officially opened in a ceremony attended by the Mayor of Guelph Cam Guthrie, who cut the ribbon, along with Andy Goyda of Owens Corning Canada. The company partnered with the University of Guelph’s College of Business and Economics and College of Physical and Engineering Science to deliver the project.

“Our relationship with the University of Guelph has really grown to encompass so much more than studying occupant behaviour in the homes” said Jennifer Weatherston, Director of Innovation for Reid’s Heritage Homes, speaking to The Canadian Business Journal. “A number of groups from the university have worked to develop a dashboard to model the production and consumption of energy. The application prototypes encourage reduction in energy through reminders and home maintenance items, thereby changing behaviroural habits of occupants.”

Reid is known for its environmental focus which includes the construction of North America’s first LEED Platinum Home in 2007. The company was also the first home builder to receive NRCan’s Energy Star Builder of the Year Award in 2012. However, building a Net Zero Home has its challenges.

“It’s a very exciting experience” added Jennifer Weatherston. “All of the homes that we are building are Energy Star certified, but the Net Zero homes really challenged us to be cost effective as that’s part of the NRCan project. We have to show innovation and cost conservation so it’s more friendly to the production environment of home building. With the first home, we learned many lessons related to construction, timing and the use of different products. Net Zero really forced us to inspect the quality and practices of our installations.”

The construction of the building involved optimal framing techniques in addition to insulation of walls, attics and basement floors. This in turn necessitated a stronger wall assembly to hold the insulation. Owen Corning’s Code Board Air Barrier System has also provided the building with advanced air sealing which reduces leakage of air and prevents thermal bridging. The building also has triple pane windows which helps to reduce noise as well as adding to insulation. Leading heating and cooling technologies also play a part, via air source heat pumps. Energy recovery ventilation units are also built into the structure in order to improve the air quality.

Other features include LED lighting, Energy Star appliances, hybrid air source hot water tanks and a drain water recovery system which uses energy captured from showers to pre-warm the water before it goes into the tank. Bluewater Energy solar panels are included alongside Building Integrated Photovoltaic (BIPV) solar panels installed by the Strathcona Energy Group. These integrated panels help to improve the life of the roof. They are integrated directly into the roof structure and do not require shingle installation as traditional solar panels do. The overall effect of this is that the total cost of purchasing the building works out at zero in comparison to the savings in utility bills.

“This shows a net zero home is not only possible, but also possible on the consumer scale where it can be available to everybody” said Mayor Guthrie at the opening ceremony. “The home doesn’t just demonstrate new and exciting technologies; it changes the way homes are actually built.”

According to Jennifer Weatherston, the building will be monitored over the next two years during which data relating to its performance will be collected and analysed. This will include a study of the effect of the technology upon the occupant’s attitudes and behaviour.

With one of the buildings complete and operational, the other four will be delivered by early 2016. The hope is that the project will have an influential effect not just on the Canadian building industry but potentially other sectors as well.

Absolute Zero? A New Record Was Set for the Coldest Temperature Ever Recorded