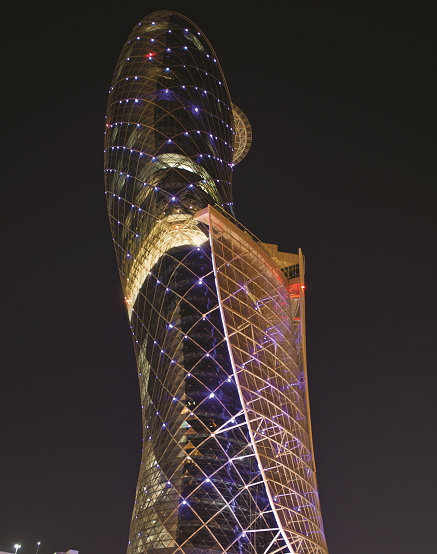 This is another proof that the engineering thought in the Arab world is developing with giant leaps. Essentially the building is a 160-meter tall skyscraper with 18-degree incline to the west, so it is also called "The Leaning Tower of Abu Dhabi." Standard skyscrapers are being built by rising concrete core in the center, around which the floors are built. In this case, to compensate for the slope of the building to the west, the core is tilted in the opposite direction and this provides structural stability of the building. The concrete core is built level after level, each concrete level is pierced by overlapping and highly tensioned steel ropes, which provides some flexibility to the building.

Glazing and floors are built using the first in the Middle East diagrid (comes from diagonal grid and is a building made of triangular steel structures with diagonal support connecting rods), designed to retain and channel powers generated by wind and seismic pressure. The diagrid uses smaller amounts of steel than standard deigns. Some other buildings utilizing the diagrid are the Shukhov Tower in Russia, Hearst Tower (New York), CCTV Headquarters (Beijing) and Seattle Central Library

Capital Gate was completed in 2011 and is expected to accommodate business offices and 5-star Hyatt Capital Gate hotel. The building also has a restaurant and pool at the higher levels.