Have you ever wondered how old or unwanted military weapons are disposed of? It may not come as a surprise to find that a large metal-grinding machine is required to effectively do the job. The US Army's DLA facility in the Anniston Army Depot in Alabama is home to a mighty weapon annihilator known as Captain Crunch that can destroy around 500-600 pistols in a day. 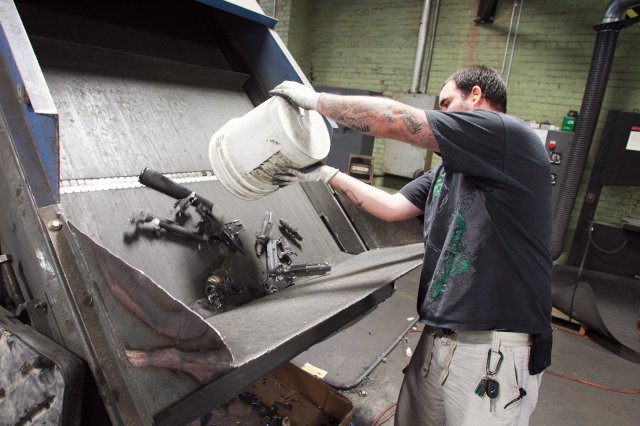 Captain Crunch: the US annihilator of all hand weapons

Captain Crunch is a gun-shredding machine located in the Central Demilitarization Division (CDD) facility in the Anniston Army Depot in Alabama. The Defense Logistics Agency (DLA) has assigned the CDD facility with the Small Arms Serialization Program (SASP) to basically destroy or demilitarize all small arms that have been officially marked for obliteration by the Department of Defense (DoD). The Anniston Army Depot is the only authorized CDD facility for destroying serialized weapons, serialized parts (triggers, trigger assemblies, and lower receivers), and all weapon trainers.

"Anyone in DoD who needs to destroy their weapons, we give them an outlet", said Jerrod Kirkpatrick, a property disposal specialist in the DLA. "We have everything from large quantities sent by the Department of the Army down to single items identified for demilitarization".


The mighty gun-shredder began destroying unwanted weapons more than two decades ago from August 1993. Captain Crunch has a pair of intertwined blades that dismantle the weapons into small pieces.

A minimum of only three employees is required to operate the machine. A weapon handler feeds the armaments into the Cruncher while two property disposal specialists are stationed on the conveyor belts to monitor if any bits have not been ground up satisfactorily. In the event when certain parts have not been completely destroyed, the specialists snatches them off the conveyor belt and feed it back to the machine for a second digestion.

"Anything we see on the belt that is not crushed appropriately, we remove it and put it back through the machine", explained Kirkpatrick.

The machine's reputation as a feared weapon annihilator isn't just attributed to its ability to shred chunks of metal into small pieces. Captain Crunch is also hailed for handling large volumes of weapons in a single day. A public affairs specialist for the DLA, Susan Lowe, attested to the overwhelming capacity of Captain Crunch.

Even though Captain Crunch process overwhelming volumes of weapons in a single day, Lowe said that the shredding machine can function "with a minimum of two people". 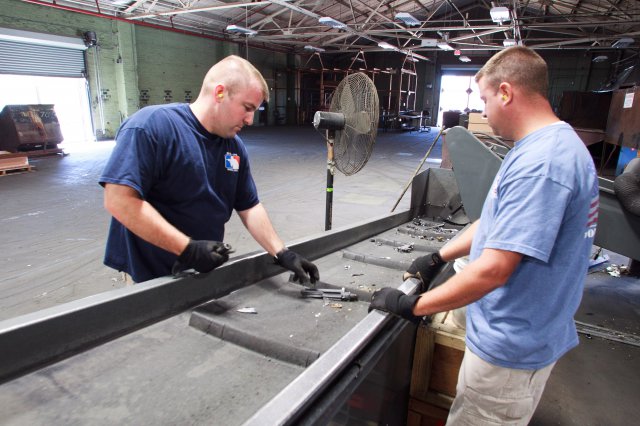 Training weapons, rifles and carbines, pistols, receivers, and shotguns are amongst the hand-held armaments Captain Crunch is able to digest. But weapon annihilation is not the only business that flows within the Anniston Army Depot. The DLA depot in Alabama is also home to other military asset services such as repairing combat vehicles. And some of the property disposal specialists get to occasionally travel to monitor the demilitarization of weapons in other locations to assess if they have been satisfactorily destroyed.

SEE ALSO: Russia’s New Cyber Weapon Can Cause Blackouts Anywhere in the World