Capturing the Light of Life - from Ivy Leaves to Exoplanets

A team of researchers has developed a special camera system you will not find on the shelves of the local tech store.

SEE ALSO: HOW DO WE SEARCH FOR INTELLIGENT LIFE?

Biologist Lucas Patty is completing his Ph.D. at Vrije Univesity in Amsterdam and works at the Hungarian Academy of Sciences’ Research Center for Biology. He built a spectropolarimeter, a device capable of capturing reflected light to give empirical proof of his investigations.

Every single thing around us reflects light. Almost all living organisms do that in a way so that they ‘rotate’ it, the light becomes circularly polarized. That results in a unique spiral pattern. 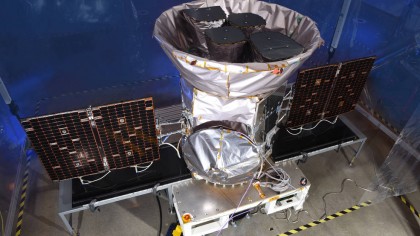 The research team summarizes it like that:’Homochirality is a generic and unique property of all biochemical life and the fractional circular polarization it induces, therefore, constitutes an unambiguous biosignature.’

Petty thus designed a system which is able to distinguish between those patterns, as in, detect only the light reflected by living organisms.

In the first stage of his research, Patty used TreePol (the special equipment) in the laboratory. He observed a multitude of leaves (ivy, ficus, etc.) in various conditions and proved that TreePol was able to distinguish healthy and dying vegetation.

From The Lab to The Streets

After the experiments in the lab showed consistent results, Mr. Patty took his ‘camera’ to the top of the research facility and pointed it towards a nearby soccer field. For his utmost surprise though, the instruments showed no signs of vegetation.

Fortunately, scientists are not too easy to trick, Mr. Patty, double-checked the first outdoor session, and stated: ‘I went over to investigate, and it turned out that the team played on artificial grass!’

During the second outside shooting, he pointed the TreePol towards trees on campus as well as a more distant site. This time the results were satisfying, he got a clear signal looking at both locations. There are two major fields TreePol will most likely be used in the close future.

Looking Down From Above

The instrument can be used for observing agricultural crops from an airplane or a satellite giving detailed information about the condition of vast fields. That would help farmers to be more efficient using tranquilizers and could result in better harvests.

Staring at The Sky

It is not a coincidence that the research is part of NWO’s PEPSci programme: the technology behind TreePol will certainly be of use for scientists searching for extraterrestrial life. Until now, when astrobiologists searching for possible life-forms in planets orbiting stars just like Earth, they tend to focus on the presence of water, oxygen, or carbon.

Though, according to Mr. Patty, this scrutiny often results in false positive alerts, since the presence of those molecules and atoms is not guaranteeing life in those exoplanets. As we cited above, the circularly polarized light TreePol detects, however, comes exclusively from living vegetation.

Frans Snik from Leiden University, a contributor to the research says: ‘We are also working on a version that could be employed on the international space station or on a moon lander.’