One Los Angeles man filmed a hilarious car commercial parody that paid off big. The clip now has close to 6.5 million views on YouTube.

Today’s market is saturated—some would even argue super-saturated—with consumer goods, so branding, marketing and creating an effective sales pitch have become more important than ever. Add in trying to sell used goods, and it becomes even more difficult.

In a truly no frills, over-the-top style, Los Angeles-based director and writer Max Lanman went to extraordinary lengths to try to offload a used 1996 Honda Accord belonging to his fiancée Carrie, a car which the couple have given the nickname “Greenie”. He hired an independent film crew who shot the commercial. Lanman, of course, lent his writing and directing skills to the production, and even went a step further by guiding the drone that was used to capture the aerial shots.

My fiancé needed to sell her used 1996 Honda Accord. To help her, I made a commercial for it. #luxuryisastateofmindhttps://t.co/02PEo2MATY

In the end, he pulled off a final product that resembles something between a documentary and light-hearted romantic comedy. It opens with a simple and hilarious message: “My girlfriend needs to sell her car. To help her I made this commercial.”

Lanman shares that the idea for the commercial has started months earlier during a drive through California: "It just dawned on me that it would be funny to make a high end commercial for a crappy car," he says. "Incidentally, [Carrie] drove the same car that she drove in high school. She's a super sentimental person so it took two years for her to be ready to sell it."

Take a look at Lanman’s creation below, which was originally shared on Reddit. The hilarious tag line: “Luxury is a state of mind.”:

After the video began to attract more attention, another unexpected turn came when Carmax—which in the end purchased the car for more than $20,000 (it had been originally priced at only $500 on eBay, and the Kelley Blue Book value was a mere $1432) responded with an equally funny and tongue-in-cheek video making an offer on “Greenie”. Take a look at the brilliant cross-media advertising scheme below:

A quick update from the beginning of last month came from Lanman: “Greenie is sold. After receiving Carmax's hilarious-but-real offer to buy the car for $20,000, Carrie accepted and we sold them the car. Thank you for watching!” He also shared his reaction to the overwhelmingly large reception from the public to the commercial: "It has been shocking. We had high hopes for it; we could dream it would go viral or serve as a calling card for commercial or comedy work, but this has completely shattered expectations." 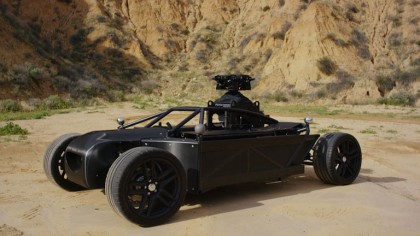 Filming Car Commercials Won't Require the Car in the Future

Does Lanman’s video symbolize that we are entering a new era of bare-bones, tongue-in-cheek advertising? If the results are any indication, the answer is an overwhelming Yes: the clip, which is just over a minute, now has close to 6.5 million views on YouTube. Of course, the average person who wants to get rid of a used product doesn’t have the same resources at his disposal as Lanman. Still, it’s interesting to see what a little technology and human ingenuity (…and assumingly an unlimited commercial budget) can do.

13 Twisted Cars From 'Mad Max: Fury Road' Are Up For Auction

5 Car Subwoofers For the Quintessential Audiophile