An illustration of a car created during the streamline era of the 1930s provides an interesting reflection of technology values and the Art Deco design aesthetic existing during the interwar period.

Since the dawn of the twentieth century, automobiles have occupied our imagination. In the last hundred years, they have offered us transportation alternatives which seemed unimaginable before their invention. Another interesting commentary on cars is the interesting way we imagine future vehicles—based on the limitations of technical knowledge and design aesthetics existing at any given time. 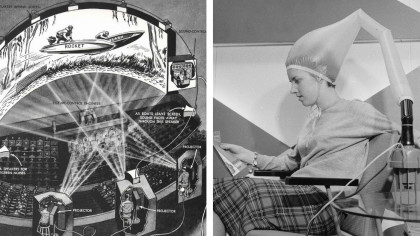 One example of this is images of a car of the future captured in a September 1935 edition of Popular Science magazine. Described as “streamlined”, it came with the following bold description of the car that claimed to be propelled on oversized rolling spheres instead of tires:

“A motor car that runs on air-filled spheres, instead of wheels and tyres of conventional form, is the invention of a German designer. All parts of the new vehicle, he maintains, merge into a highly streamlined shape, thus minimising air resistance. The globe-shaped tyres require no mudguards, and dispense with the need of springs to absorb road shocks, also reducing skidding and serving as bumpers in the event of collision.”

“Multiple air chambers prevent sudden deflation, with its attendant dangers, if a puncture should occur. In the proposed design, the car runs on a pair of pneumatic spheres at front and rear, and the driver balances it like a motor cycle by manipulating a steering wheel. Small auxiliary spheres may be extended to hold the car upright while it is standing still or getting under way.”

We can also surmise from the illustration that cars of the future of this time were strongly influenced with combining car innovation with popular images of the spaceships, decades before any missions beyond the planet Earth had taken place.

Also in the decade of the 1930s, streamlining dominated—as a concept and a design directive created to reduce the aerodynamic drag associated with earlier models from the 1920s.

There were many examples of these cars—which translated into the Art Deco design aesthetic, but most were practical—still lofty in terms of the design aesthetic—yet few looked like the one pictured in the magazine. The same streamlining innovations were happening in the fledgling airline industry thanks to the contributions of pioneers in the field like French aircraft designer and builder Louis Charles Bréguet, which explains the overlap of the evolution of the two industries happening at the time.

Like some cars of the future we see today, there were many practical considerations taken; however, more complete technology-assisted rounds of testing could not be performed. Is it because we’re wiser, or because in today’s world—with all its global market pressures—that simply the stakes are higher? In other words, there is no room for error, which means that high performance and high standards are taken as a given. The saturation of electric cars and self-driving cars we see on the market is proof of this.