Carcassonne: The Fortified Town of Southern France Built By the Visigoths With an Inner Medieval Fortress

The Cité de Carcassonne has stood the test of time - From invading Romans and Visigoths to becoming a military stronghold, and eventually inspiring Disney.

Located in France's South-Western Occitanie region, the fortified town of Carcassonne has a vibrant history stretching back as far as the 5th Century BCE. From the Iberians, to the Romans, and then the Visigoths, the town has seen various civilizations come and go across its storied history.

Its beautifully-preserved buildings provided inspiration for Disney's Sleeping Beauty, and continue to enchant tourists to this very day. In 1997, the Medieval Cité de Carcassonne was added to UNESCO's World Heritage list, meaning the citadel and its surroundings will remain in top condition for generations to come. Below is just a brief history of this incredible, historic site from its earliest beginnings to its status today.

There is evidence that the site of what would one day become Carcassonne's walled city has been inhabited since as early as the 3500 BCE. It is suggested that the earliest inhabitants of the area were Celts, but it wasn't until between the 5th and 6th centuries BCE that the location became an important site for trade.

Its location on the summit of a hill also made it an ideal site from a militaristic and strategic point of view, which attracted Iberian settlements. By 100 BCE, the Gallo-Romans seized control of the hilltop, fortifying the area and building the lower courses of the northern ramparts.

The Roman reign ended in 462 CE when they relinquished control to Visigoth King Theodoric II. The inner rampart dates back to the year 485, during the rule of King Euric. Though the Visigoths added much to the structure of Carcassonne, their reign was also brought to an end eventually. Throughout their reign, they were threatened by invading forces, including Frankish King Clovis in 508, Islamic Saracens in 725, and King Pepin the Short in 759.

11th Century to 16th Century: Growth Throughout the Medieval Era

While its earliest beginnings started almost a millennium beforehand, it was in the medieval period that Carcassonne experienced the bulk of its growth. It is also the buildings from this period which give the town its iconic and charming style.

By the early 11th Century, the town became the property of Viscount Raimond-Bernard Trencavel. It was under the rule of the Trencavel family that Carcassonne's Basilica and Château Comtal were built. The Château Comtal is particularly notable for the fact that it was incorporated into the rampart that had been built during the Visigoth reign.

In the 13th Century, much of the Basilica's Romanesque architecture was replaced with Gothic embellishments. After the city acted as a stronghold for the Occitan Cathars in the same century during the Albigensian Wars, its citizens were forced to surrender and leave by Abbot Arnaud Amalric.

Following the expulsion of its citizens, the city fell into the hands of the Kingdom of France. King Louis IX and his successor, Philip III, added turrets and towers to the ramparts and oversaw the installation of detailed stained glass windows. Philip III was also responsible for the city's iconic gate - the Porte Narbonnaise.

Following the Treaty of the Pyrenees in 1659, the Roussillon province was annexed to France and Carcassonne's military significance waned considerably. In the intervening years, the once great citadel fell into decay, its fortifications left abandoned.

Throughout the 18th Century, the city remained inhabited as an industrial hub for textiles. But by the close of the century, the Ottoman market had evaporated, and the area suffered huge blows to its population. Eventually, it became a quiet, rural town, unrecognizable from the busy city it had once been.

So it remained, until in 1849 the government proposed to demolish the city, and was met with public outcry. Medievalist and architect, Eugéne Viollet-le-Duc, was already in the process of restoring the Basilica and was then commissioned to restore the entire town as a historical monument. Viollet-le-Duc concentrated much of his attention on the restoration of the towers' and ramparts' roofs.

Following his death in 1879, his work was continued by Paul Boeswillwald and Nodet. The work came under criticism for its use of period-inaccurate materials but is today heralded as a worthy preservation of one of France's most significant historical sites.

Carcassonne Today: Structure and Use

The city as it can be seen today features two walls, dotted with 53 towers and barbicans. These walls stretch for 1.9 miles (3km), and were built in a concentric design. Other notable features of the fortification include a moat and drawbridge, leading to the central keep of the citadel. 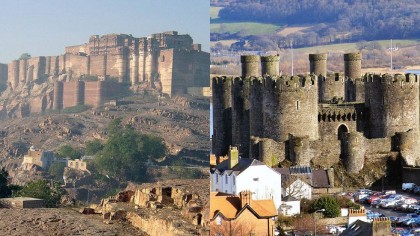 21 of the Great Fortresses Around the World

It now also features a theater - the Théâtre de la Cité - which was built in 1908 on the site of a former cloister within the fortifications. The theater remains in use today, hosting a variety of performances.  Throughout the 20th Century, the city provided inspiration for a host of media that featured medieval settings - from Disney films to video games.

The reconstruction of the town lasted well into the 1960s, and the area is now home to roughly 1,000 inhabitants. With its stunning panoramic views and quaint medieval architecture, the city has become France's second largest tourist attraction. The site offers tours of the chateau, basilica, and even a museum of torture to guests. Visitors can even stay overnight in the cité, as there are a number of hotels situated within the old fortifications to choose from.

Though its controversial restorations might still strike some people as twee, there is no denying that the Cité de Carcassonne is one of the most enchanting and fascinating surviving examples of medieval architecture in Europe. Many visitors report feeling as though they were walking through a different era while strolling the narrow streets of Carcassonne, and its allure doesn't seem to be waning.

This fortified hilltop town has already seen the passing of so many centuries and civilizations, from migrating Celts to Roman armies. It remains a living artifact of over a millennium of human history and progress, and its story is still ongoing.