You Can Carry This Tiny Pocket PC Wherever You Go

Smartphones and other handheld "computers" have come a long way in recent years. They do, however, lack the capabilities of a good old fashioned desktop PC. Wouldn't it be great if we can miniaturize one and carry it around? Well, Intel has answered the call with their credit card-sized Pocket PC. You get the functionality of a desktop and it's easy to carry around. Nice! Enter the Intel Compute Card. It's not only neat but happens to be the world's tinniest computer.

Intel created the NUC several years ago, providing the full power of a PC into a small box. With Compute Card they've gone to the next level of miniaturization. Let's take a quick look at this mini PC.

Judge me by my size, do you?

Couldn't have put it better myself, thanks Yoda! It packs a lot of computing power into a small space. It even has notebook-class Core i5 processors in it. This Pocket PC is set to transform your PC into something you can carry with you anywhere.

Revealed at CES earlier this year the Compute Card is certainly making waves. It will support a range of configurations with up to an impressive 4GB of RAM, 128GB flash storage as well as built-in 802.11 Wi-Fi and Bluetooth 4.2 connectivity! All within a device that is 95mm long by 55mm wide by 5mm thick, just a little bigger than a credit card. If that isn't enough, Intel revealed at the Computex 2017 Technology Expo the Compute Card Device Design Kit. This will be a kind of blueprint for PC manufacturers to replicate and produce modular computing products that will explore the capabilities of the Pocket PC.

Intel also mentioned a design for a tiny desktop PC shell which will come with USB ports, HDMI, DisplayPort and Ethernet connectivity. Just stick in the card and hey presto! Your very own fully fledged PC. 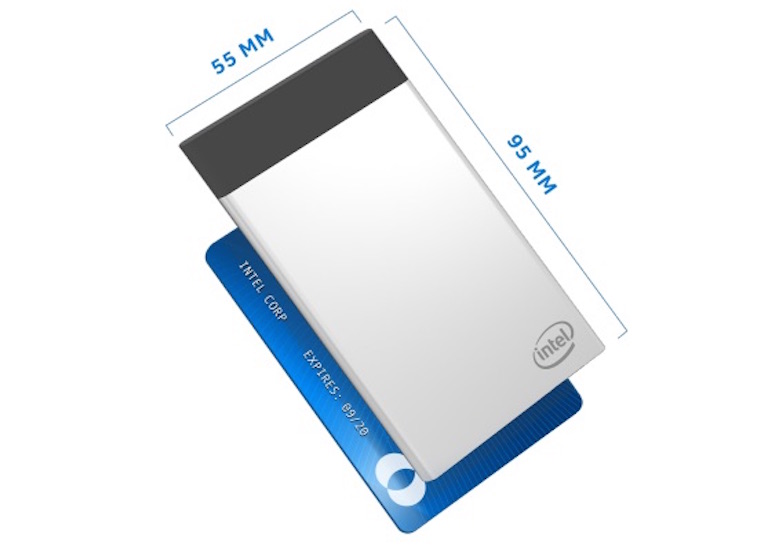 According to Intel the Compute Card will use proven Intel architecture "to establish a new way for computers to interface with devices", they say they are "opening up virtually unlimited potential for the consumer, business, and industrial applications." The modular nature of the device will allow for flexibility for internal and external integration with devices through a compute card slot.

"Companies will be able to extend capabilities for devices such as digital signage and kiosks, All-in-Ones, smart TV’s and appliances – all while reaping the benefits that modular computing can offer, such as simplifying inventory management and serviceability." believes Intel.

Intel anticipates "flogging" them for between $140 and $450 dollars, depending on which model you choose.

Intel believes they are creating a transformative new product category. They think that the Compute Card will bring "the power of computing and connectivity to any product, anywhere." This Pocket PC is set for release in August of 2017 and certainly has an elegant, simple and portable design. The design of this product should make it easy to install, maintain and upgrade independently of the partner-certified device.

With the rate of advancement in computing devices could this solution be a game changer? There is definitely a need for modular computing like this. Most devices today are designed to become obsolete, this is very wasteful of resources and your bank account. Newer releases of devices are little more than more of the same with some gimmicky extras, maybe a new camera. Ooo lucky us! With the Compute Card Pocket PC, Intel could be paving the way for an entirely new approach to connecting devices.

"[It's] about bringing computing to new types of devices, not about replacing traditional ones," Intel's Bruce Patterson told reporters.

Third parties get on board

Other manufacturers are already starting to experiment with the potential of this Pocket PC. LG, for instance, have started to play around with a large display that becomes an all-in-one PC when the card is inserted. Seneca plans on using it to power a digital media player. Sharp even plans to embed it into an intelligent display device. Intel has even created a dock for the cards with similar function to its NUC devices. This basically makes them modular desktop replacements.

Foxconn, the company who builds devices for Apple and Dell, amongst others, have been producing some tantalizing mock-ups for future tech. This includes a thin convertible laptop powered by the Compute Card. They also produced a mock-up of a monitor stand that turns into a PC when the card inserted and a monitor is connected to it. Given the modular principle of the card, obsolescence may have come one step closer to extinction. In the future, you'll simply change the card to upgrade your entire PC! This will certainly be of interest to consumers.

Intel does face significant problems with the Compute Card of course. It will only be a viable technology if manufacturers adopt it. Dell, HP and Foxconn are on board but it is hard to judge how enthusiastic they actually are. They will only know this once devices start to ship. Intel will also need to commit to supporting the card for several years. Intel is planning to keep this version of the platform running for at least a decade.

The potential for the Compute Card is great. Being able to carry the power of PC in your pocket, sticking it into any number of devices to turn them into PCs is awesome. If it catches on we could see a new revolution in computing that will make costly hardware upgrades a thing of the past. Is your old computer now underpowered? Just switch out the Compute Card instead of buying a whole new PC or replacing the motherboard.

The Compute Card should have great applications in the education industry. Perhaps they could be used as inexpensive Chromebook-type laptops. Perfect for clumsy children damaging computer shells and making the mass upgrade of computers a breeze. Pupils could move their cards between laptops, smart screens, and home setups.

What do you think? Are you excited by the possibilities of the Compute Card? Would it interest you as a consumer?