Check out the Cool Engineering Design Behind This Simple Nerf Gun

A Nerf gun or Nerf blaster is a popular toy armament for kids and especially for adults looking for a harmless, friendly war. With different levels of ammo capacity, blasting speeds, and size range, everyone is bound to have ultimate fun with Nerf guns. But just like all products in the world, Nerf guns are based on engineering principles and designs that allow them to deliver the fun they are expected to.

YouTuber, engineerguy (Bill), breaks down the components of a small Nerf blaster and conducts an analysis on the air restriction mechanism. Yes, that mouthful of a phrase is the engineering that went into a simple Nerf gun. And since this is Interesting Engineering, we will also attempt to give our own analysis of the mechanics of this Nerf gun. He specifically questions why the gun only blasts one dart at a time, so let's find the answer to that by ourselves.

First and foremost, to understand engineering principles, you need to be familiar with the variables, or in this case the components of the gun. The important components to note are the plunger, spring, and valves. Each of these has their key role in the grand execution. The plunger works by sucking air and loading the gun barrel with pressure. When the trigger is pulled, the pressurized air sends a dart into a trajectory and the higher the pressure, the faster and farther the dart shoots. The conversion of potential energy into kinetic energy stored within the spring, when the trigger is pulled, is what gives the pressurized air force and in turn give the dart momentum. Ok, let's get to the actual question - why does the gun only fire one dart at a time? 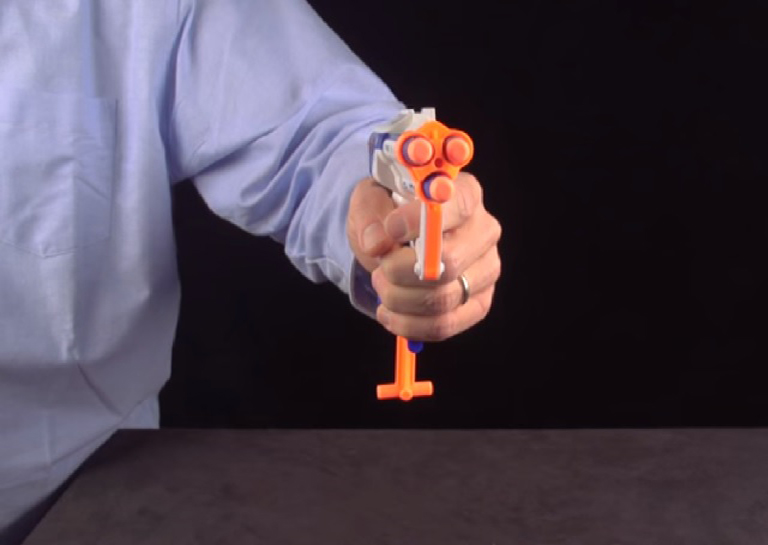 The gun's barrel is designed with a maze of air pathways where the valves are actuated. When a specific valve is loaded with a dart, pressurized air only penetrates through that dart's airway and fires it out. After firing, the first valve that was fired out locks its airway directing the pressurized air to travel to another valve. This cycle continues until all valves and darts have been fired - Nerf engineers dub this cycle as "cascading a blast of compressed air". 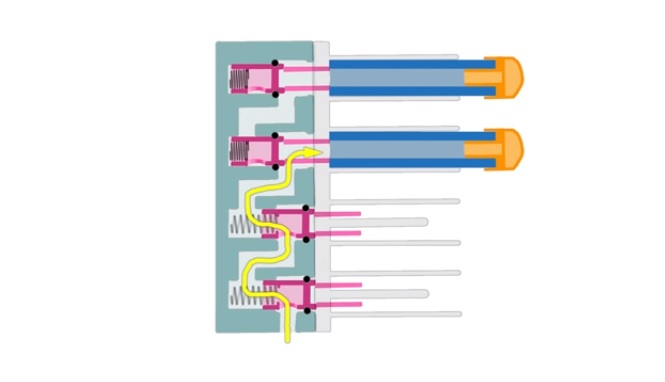 Once you get the hang of compressed air mechanics, you can take advantage of this knowledge and manipulate the design so you can fire all the darts at once. This is exactly what Bill did as he loaded the darts only in part way so that the valves are all half open allowing the compressed air to seep even through to the top valve. With access to all the valves, the three darts are able to be fired all at once. But because the compressed air is split into three payloads, the power of the trajectory is also diluted so the darts are only fired at a close range with weak pressure.

This simple yet effective engineering design goes a long way as the Nerf gun is still, to this day, one of the coolest toys kids and adults can have.

SEE ALSO: Top 10 Coolest Nerf Gun Rigs for the Kid in Everyone

The Engineering Behind Refueling a Fighter Jet in Mid-Air