Virtual reality is starting to become a very real facet of our everyday life. As products like the Oculus Rift and Microsoft's Hololens become more affordable and widely produced, very soon everyone will be able to experience the wonder that is VR. When the Oculus Rift was still in development, I got to try it out and it was mind blowing, even though it was still in its infancy. Check out this collection of gifs showing the insane ability of virtual reality!

Playing fetch with real dogs is just too much work, and why make time to train your dog when you can play fetch with this cute robot dog in virtual reality? After all, playing with that adorable gray jellybean with legs beats out real interaction any day.

Visualizing your maladies and the function of your body will become easier than every with the interactive 3D technologies available through virtual reality. One of the most promising aspects of virtual reality may come in the medical fields as well as technical education. Imagine learning about how something works while being fully immersed in it.

If you have dreams of becoming an astronaut or space fighter, but don't want to go through the rigorous training, VR will enable you to become the best spaceship ace on the internet!

Everyone loves getting scared out of their minds by playing horror games. Imagine actually feeling like you are in that abandoned mansion infested with monsters. One things for sure though, you're going to want to be in a padded room when you play this so when you pass out from fear, you don't hurt yourself.

Along with virtual reality has come advances in motion tracking with real time integration into 3D displays. As this ability is moved forward, you will be able to gain an even deeper sensation of feeling immersed in a game.

Walking around is still something that needs to be overcome with virtual reality, but there are several products that may have it figured out. This guy however may want to be more careful that he doesn't run into a wall.

This is one idea that is marketed to have solved the problem of walking and created a platform allowing you to walk while staying in one place, and even shoot an arrow!

Hiding in a virtual barn won't protect you from the boss you are facing in your favorite video game. The feeling of virtual reality transcending into actual reality is coming closer, and that's a little scary.

When people use VR devices, the first thing they want to do is experience a virtual office, okay just kidding. Really though, VR has applications outside of fun gameplay and creative expression.

Not only can you touch your toes in the real world, but you can now do that in VR. Technology is awesome.

Imagine integrating motions with real time resistance devices so throwing a monster across the room won't just feel like you are flailing your arms like an idiot.

Virtual reality is most likely here to stay, and as it gains more traction it will start to be integrated into everyday activities. Who knows, maybe you can take your next vacation to the beach by simply putting on a headset? 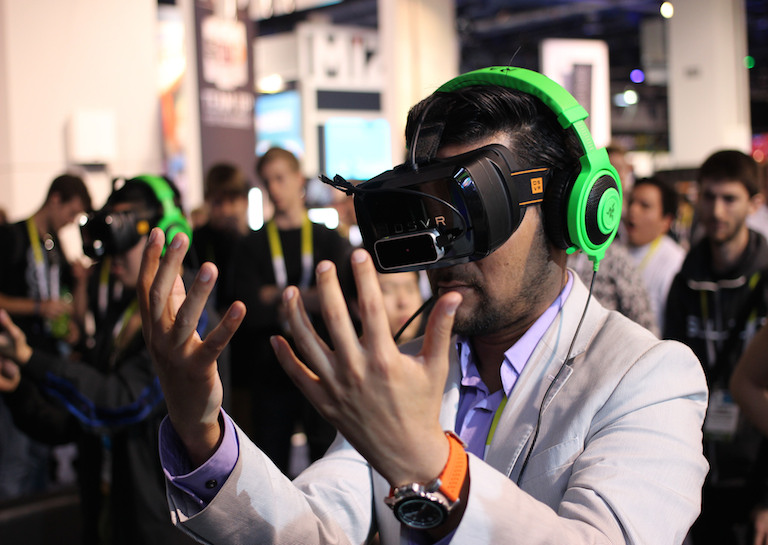