A team of academics has predicted that we will have mega-skyscrapers, underwater cities, and personal drones in just 100 short years into the future.

According to a new report, the future may be here sooner than you think. Commissioned by Samsung and carried out by SmartThings, academics and researchers predict underwater cities, personal drones and mega-skyscrapers all by the year 2116.

The team even predicted that we would be vacationing to the moon or even mars in just the next 100 years.

The team of academics includes architects, futurists and other speakers from the University of Westminster. A lot of the technology needed to do the things predicted is already here, and it just needs to be scaled up and become more cost-efficient.

Experts say that due to the increase in population, humans will live in large urban centers consisting of supertall skyscrapers, taller than anything we have ever seen. Other than going up, the report suggests that there will be "earth-scrapers" going as far as 25 stories underground.

As if that wasn't already enough they believe that there will be sphere like "bubble cities" that produce oxygen from the surrounding water. Drone technologies are predicted to grow at a rapid rate enabling the everyday man to travel anywhere he would please in his personal drone.

The report also predicts that the food industry will be reshaped by 3D printing technology. Families will be able to download whatever meal they want off of databases from acclaimed chefs and restaurants. 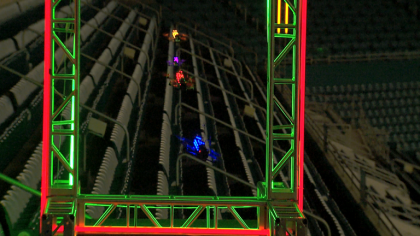 Drone lovers, there is actually a drone racing league you should not miss out on

Then once you're done with your 4 course 3D printed meal, have a large drone take your whole house to a vacation spot of your choosing. This may sound absurd, but given advances in modular design and large scale affordable drone's, these all may be what the future has in store.

As a society, we are facing an age of rapid development never seen before in human history. With the ability to communicate with anyone around the world instantly, rapid prototyping, and other technologies, technology is advancing at an accelerated rate.

Keep in mind, all of these are just predictions about the future from an independently contracted team, but they may end up being right. There isn't much that holds back technological growth in the modern era other than of course, the laws of physics.

Technologies like smart homes and 3D printing will all seem commonplace in the future. To our kids, they will always have existed, and it will be hard to imagine life without the ability to design and print your toys, or vacation on Mars.

All this technological advancement may sound scary to some, but you better get used to it. Given advances in current medical abilities, there's a high likelihood that you may live to see 2116.

For now, we have to put up with smartphones and expensive rapid prototyping machines, but hey, why not see what you can do to help make the future come a little faster?