Check out this golden AK47 guitar!

This golden AK47 guitar is the product of fine craftsmanship by Jimmy DiResta, who has featured on Discovery Channel, HGTV, DIY, and FX and is the owner of a successful Youtube channel. On his website he describes himself as an "experienced television personality as an on camera  designer/builder host." 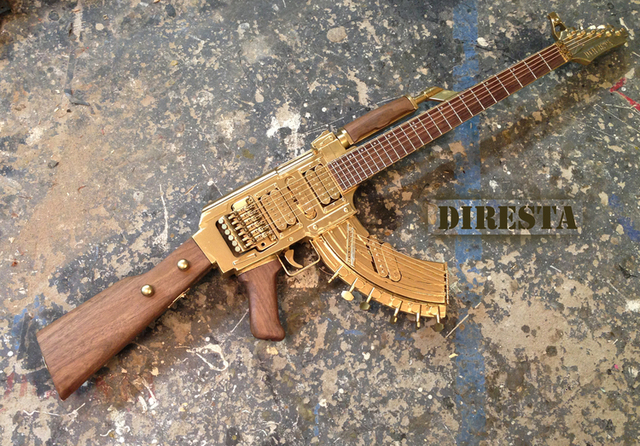 He designed and built the guitar, also know as the Gattar, for Wyclef Jean and based on the design of the AK47. The video below shows a sped up video of the manufactuing process from start to finish. DiResta cuts and shapes blocks of wood to the design of the AK47 before assembling it all onto a custom cut guitar and spray painting it gold.

The trigger acts as a whammy bar and on the clip of the gun is an open chord fretless mini guitar. Other knobs control the pickup volume and tone as you would expect on a normal guitar.

When asked why use the shape of the gun, Wyclef says "we feel that music is the weapon," before continuing to talk about saving kids from the gun culture. They then had to decide on which gun was best suited for what they wanted. The M16 and the Uzi were written off when they realised that the AK47 was the 'gun of the revolution'.

Not sure about the artistic message behind it, but its definitely the result of some fine craftsmanship and it certainly looks cool.