A new interactive map shows the effects of global warming on 540 urban areas in the United States and Canada.

Climate change is looming over us with reports from the Intergovernmental Panel on Climate (IPCC) warning that there are less than 12 years for global warming to be kept below 1.5°C.

SEE ALSO: INTERACTIVE MAP SHOWS YOU WHERE DIGGING TO THE OTHER SIDE OF THE EARTH WOULD LEAD

Meanwhile, the European Geosciences Union is stating we could hit the point of no return after which limiting global warming below 2°C in 2100 will be unlikely.

Yet, not enough is being done to curb these devastating impacts. Now, a new interactive map may help raise awareness. 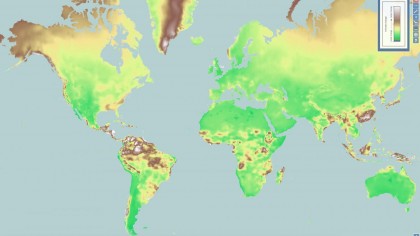 Matt Fitzpatrick from the University of Maryland Center for Environmental Science and Robert R. Dunn from the Department of Applied Ecology at North Carolina State University Campus have built an interactive map that illustrates just what global warming will do to towns in the United States and Canada.

The map features 540 urban areas and comes with an accompanying study, published in Nature Communications. The purpose of the map is to illustrate visually what many people fail to understand intuitively.

"A major challenge in articulating human dimensions of climate change lies in translating global climate forecasts into impact assessments that are intuitive to the public. Climate-analog mapping involves matching the expected future climate at a location (e.g., a person’s city of residence) with current climate of another, potentially familiar, location - thereby providing a more relatable, place-based assessment of climate change," reads the study.

Fitzpatrick and Dunn compiled several climate change datasets including one for current climatic conditions, another for climatic predictions, and one for historic climate variability. They also used 27 different Earth system models.

The result is a study that makes some dire warnings about what will happen if not more is done to prevent global warming.

"For 540 North American urban areas, we used climate-analog mapping to identify the location that has a contemporary climate most similar to each urban area’s expected 2080’s climate. We show that climate of most urban areas will shift considerably and become either more akin to contemporary climates hundreds of kilometers away and mainly to the south or will have no modern equivalent," reads the study.

"Combined with an interactive web application, we provide an intuitive means of raising public awareness of the implications of climate change for 250 million urban residents."

We checked out our hometowns and were frightened by the results. If ever there has been a cry to change things, this map is it.

This Serene-Looking Background Photo Will Cause Your Phone to Crash