Eight-legged horses and lurid colored flowers might more easily come to mind when thinking about the Chernobyl Nuclear Power Plant than a multi-faceted art event. But last week the toxic site was transformed into a giant light sculpture by artists and party goers.

ARTEFACT by Ukrainian artist Valery Korshunov is the first cultural event in ‘The Zone’ since the site’s disaster. On April 25, 1986, a routine safety test at the Chernobyl Nuclear Power Plant in Pripyat, Northern Ukraine experienced an unexpected power surge that resulted in Reactor No 4 going into meltdown.

A second explosion pushed masses of toxic smoke the atmosphere. The radioactive material released from the exploding reactor was 400 times more than the combined fallout over Hiroshima and Nagasaki during the second world war.

The area around the site was cordoned off as an exclusion zone known as the Chernobyl Exclusion Zone or CEZ. The area just two hours north of Kiev stretches 30 kilometers in all directions from the blast zone.

It is uninhabited save for a small group of residents who refused to leave when the forced evacuations occurred. In May this year, the Ukrainian government announced that the site was safe for visitors after the Sarcophagus a steel and concrete structure that was placed over the burnt out reactor was completed.

The zone has since become a popular tourist destination with tours running from the capitol every day that includes radioactive icecream and selfie stops. ARTEFACT builds off this access inviting spectators to a series of events inside the exclusion zone.

Alienated site perfect location from which to examine geopolitical relationships

‘ARTEFACT is an answer of art to continuous problem of digitalization and general overload of information space, the dominance of fake news and the low level of media literacy of the population,’ the festivals website reads. “In the post-truth era, we need an information revolution, an appeal to conscious consumption and dissemination of information, stick to a media diet and strict media hygiene rules.” 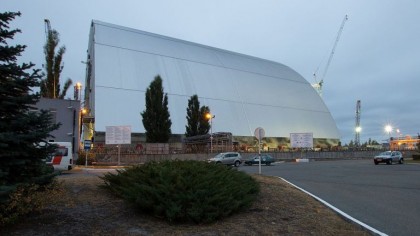 ARTEFACT culminated in a live event at the site that included live performance, parties, Vjing and sculpture. Korshunov says the time is right to fill the zone with new meanings.

He suggests the space is the perfect place for a discussion and interrogation of world movements and events. ARTEFACT was supported by the Ukrainian cultural fund and other government ministries.

The main event of ARTEFACT took place on November 22 in the center square of Pripyat, the village closest to the reactor site that was home to 50,0000 people before the accident. Geiger readouts of the areas open for access to visitors read 36. A reading over 40 is considered harmful.

5 of the Most Radioactive Places on Earth

12+ of the Most Radioactive Places on Earth