Puerto Rico is still facing the painful aftermath of two tropical storms that decimated its infrastructure, but industry leaders like Elon Musk are committed to making a difference on the island, most recently through supporting a children’s hospital with a battery pack.

Private citizens and industry leaders have really been stepping up their efforts to provide relief to storm-battered Puerto Rico, and this is definitely true for Elon Musk. The Tesla CEO has expanded the relief initiatives, which he began last month, to now include Powerpack batteries.

Hospital del Niño, a children’s hospital located in the capital of San Juan, will be the recipient of the power source. The timing could not have been better, as the effects are still being seen in Puerto Rico more than a month after the storm passed, as residents are facing the sobering reality every day that 85% of the island is still in the dark.

As the power generated by microgrids comes from solar, wind and other renewable energy sources, it is the most viable option. Puerto Rico Governor Ricardo Rossello had begun talks with Elon Musk at the beginning of this month, eager to consider the best options for the island. Musk described this as the “first of many solar [and] storage projects.” 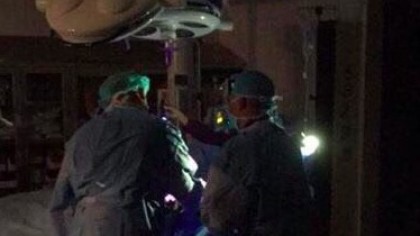 Many people on the island still remained relatively isolated. The vital link between access and electricity has become painfully clear when we look at the stories that have been emerging in the past few weeks. In post-disaster environments, what typically happens is that due to the drastic and sudden loss of infrastructural support, people lack the tools to seek out medical support, or to understand when assistance may be coming.

It’s been a race against time to mobilize efforts to get to sick people who need help but are unable to contact anyone. Scores of hospital workers have been opening clinics and providing around the clock medical care, but this is not enough without electricity:

"Yesterday alone, we saw 130 patients, sometimes climbing over fences to reach patients unable to move who are essentially trapped in their homes and are being kept alive and fed by neighbors," shared a hospital worker from one of the facilities that has popped up in the past few weeks.

"We went somewhere today where they still hadn't seen any help," another anonymous hospital worker shared. "There is a huge problem because the lack of communication has made it so that people have no idea what help is available or when FEMA is coming."

A Blessing in Disguise?

This is in some ways an opportunity for Puerto Rico to engage in a long-term solution that takes into account sustainable energy, but it would require abandoning their mostly fossil fuel-centered methods of energy generation and providing adequate support for existing solar farms. The technological capabilities that come with Tesla’s support will provide the missing link of grid support and energy storage systems for harnessing the precious commodity.

In other words, the challenge now is not to rebuild what existed before, but to create a completely new energy footprint.