How does China solve the country's prevalent public transportation problems? By unveiling the world's first autonomous train transit system that runs on a virtual track.

The world's first railless train was revealed last week in Zhuzhou in central China's Hunan province. China's state-owned enterprise called CRRC began developing the Autonomous Rail Rapid Transit (ART) back in 2013 to provide a solution to the country's transportation problems in congested urban areas. It is considered to be a cheaper alternative to other commute networks as well as being sustainable and environmentally friendly. With a cross appearance between a bus and a train, the autonomous train is composed of three carriages and spans 30 meters long. It's part of the intelligent rail express system by CRRC, which operates on rubber tires as opposed to traditional rail tracks. A pair of dashed white painted lines acts as virtual tracks which the autonomous train follows. 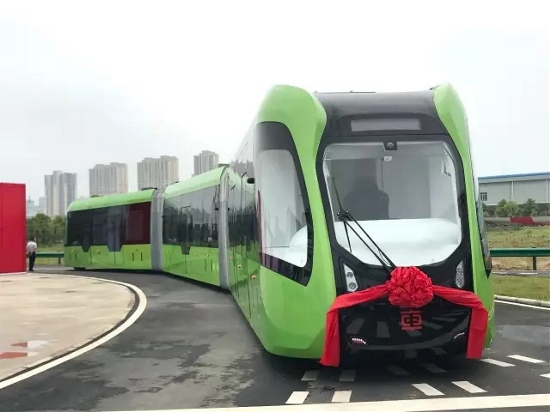 This ART system can be driven up to a maximum speed of 70 km/h and can carry up to 300 passengers at a time. Providing a new and smart method for solving urban transport pressures, the autonomous vehicle is powered by electricity, which can journey to a distance 40 km when fully charged. It uses a lithium titanate battery and can embark on a substantial journey with only 10 minutes of charging. Equipped with sensors, the autonomous train can process and analyze road dimensions then plan its own course. Very much like a bus-train hybrid vehicle running on a virtual track. CRRC can also add more carriages to the transit system in order to increase the passenger capacity. Moreover, the newly developed ART system can be integrated fairly easily into existing road infrastructures as it doesn't require heavy construction works compared to rail track systems.

In general, most medium-sized and smaller cities in China doesn't have the budget to build expensive subway systems, or most of the time, they take too long to build. So, this solution proves to be ideal because of its multiple advantages over conditional transit systems. It's cheap, sustainable, and is able to transport a large volume of people in a fast and reliable manner. 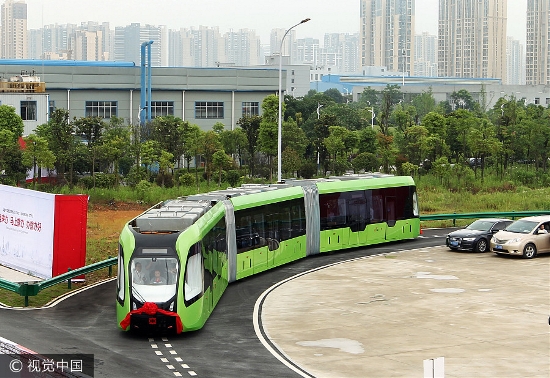 The current ART system is still in its prototype stage and is driven manually by a human driver. However, the Zhuzhou city government in the Hunan province is expected to build a 6.5-kilometer ART line throughout its downtown. Operations of the autonomous train within the city will begin in 2018.

SEE ALSO: China’s Largest Solar-Powered Drone Can Stay in the Air For Months