This 100-meter air purifier could be China's biggest tool in its quest for lowering dangerously high air pollution and smog levels.

Chinese officials recently revealed what could be the world's largest air purifier, according to government reports. The air purifier should help mitigate China's high levels of smog and ultimately improve overall air quality for those living in the city of Xian.

The tower is situated in Xian in the Shaanxi province, where researchers from the Institute of Earth Environment at the Chinese Academy of Sciences continue to test it.

“The tower has no peer in terms of size … the results are quite encouraging,” said Cao Junji, the head of research for the air purifier.

In total, the researchers reported, it improved air quality over a 10 square kilometer (approx 3.9 square miles) area in Xian. However, this updated information comes just a day after Shanxi and other regions had some of the highest air pollution readings in recent months. It even broke the streak of improvements reported by Beijing, Tianjin, and 26 other cities in the northern regions of China which had declined in pollution levels by over 33 percent at the end of last year.

"By noon on Monday, the air quality index for the city of Linfen had shot up to 428, according to the China National Environmental Monitoring Centre’s real-time data," the South China Morning Post reported. "The number refers to the concentration of small, breathable and toxic particles known as PM2.5. Smog levels above 300 are considered dangerous and the scale tops out at 500." 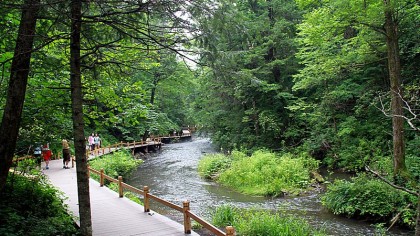 Cao also told South China Morning Post in an interview that on the worst pollution-filled days, the tower could reduce smog to nearly moderate levels.

“It barely requires any power input throughout daylight hours. The idea has worked very well in the test run,” he said. No word yet from the Chinese government as to whether these towers would be duplicated throughout major urban areas upon the success of this first tower.

This tower is only part of a much larger strategy to reduce pollution, smog, and overall emissions throughout China. In addition to the air purifier, the Chinese government also plans to cover nearly a quarter of the country's total land area in trees. In 2013, China declared a "war" on smog and enacted a national air quality action plan that was set to last for five years. The 10 major measures in order to tackle atmospheric pollution, according to the SCMP, included industrial restructuring, upgrading technology, and more effective monitoring of issues.