An ambitious, Chinese-led international framework is aiming to revive the ancient Silk Road trading route in order to restore China's influence in the international commerce arena. The framework, or the Belt and Road initiative, is funding a $900 billion global-scale infrastructure project that would ultimately expand China's reach across Asia, Europe, Middle-East, and Africa.

Since the dawn of the global trading history, the Chinese have always been one of the world-leading merchants due to their extensive reach from the Oriental corners of the globe across through the Mediterranean seas of Europe. Their millennia of success within the global marketing business can be largely attributed to the ancient trading route most commonly known as the Silk Road. Fast forward to the current 21st-century global trading climate, a significant stagnation in the flow of commerce is causing serious threats to the economic prosperity of China. And the communist country's leaders are greatly concerned about losing their vast international consumers that basically propelled China to be the largest manufacturer of merchandise in the past decades.

In order to secure the country's future as the world-leading traders, China has launched an ambitious global-scale infrastructure project known as the Belt and Road Initiative. Inspired by the ancient Silk Road trading route, this new and extensive Belt and Road route will encompass 60 countries and regions across the globe. From Asia to Europe and even through Sri Lanka all the way to the Middle-East, the 21st-century trading route is aimed to create new business opportunities.

"The Belt and Road initiative is set to reinvigorate the seamless flow of capital, goods, and services between Asia and the rest of the world, by promoting further market integration and forging new ties among communities", described the Initiative's website.

The $900 billion Chinese-led infrastructure project is envisaged to connect the three adjacent continents along five routes. The "Silk Road Economic Belt" will link China to Europe, Middle-East, and other parts of Asia by land. The "21st Century Maritime Silk Road" is focused on creating seagoing paths from the Chinese coastal ports to Europe via the South China Sea and the Indian Ocean. China will also gain access to the South Pacific Ocean through a South China Sea route. 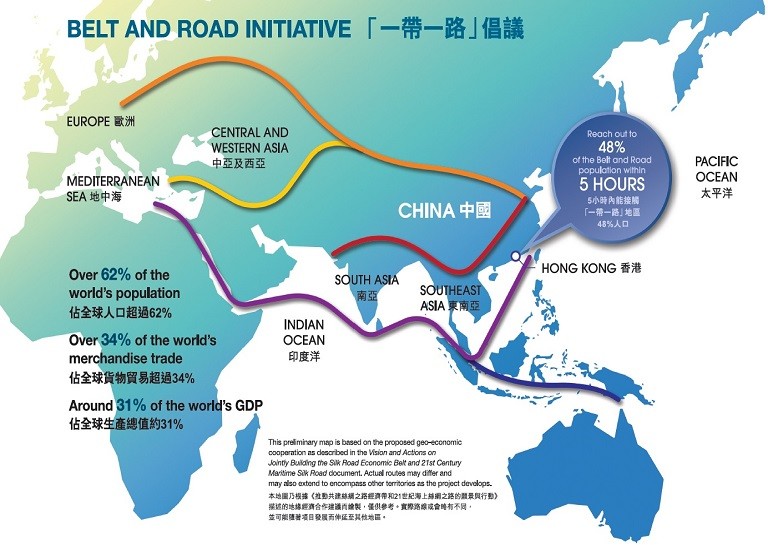 An avenue to brand new opportunities

As well as enriching the current global commerce climate, the Belt and Road initiative is also aimed to improve other aspects of international relations. One of the initiative's primary target is to strengthen the bond and ties between people from various national backgrounds. By doing so, the initiative will "form the basis for the advancement of regional co-operation".

One of the most interesting aspects of the Belt and Road initiative is the construction of new railways, highways, air routes, telecommunication, oil and natural gas pipelines and ports. On the grand scheme of things, these cross-country facilities will essentially establish an infrastructure network connecting oriental sub-regions with Europe, Africa, and other parts of Asia.

Furthermore, Chinese leaders are also promoting international collaborations in the fields of science and technology through the Chinese-proposed international framework.

This 21st-century international endeavor to create windows of opportunities for small, medium and large business enterprises may sound beneficial for all countries involved. However, plenty of nations are concerned that the modern Silk Road trading route may be a one-way avenue that will only function to boost China's economy and commerce. In any case, this vast and winding trading network promises innovative solutions to regional cooperation as well as optimizing collaboration efforts in science and technology.

Trading Apps Surging After the GameStop Squeeze on Robinhood

The Ship Blocking the Suez Canal Could Take Weeks to Remove