China is Almost Ready to Unveil Its New Solar Highway

This new roadway will mark the second one built by China in efforts to reduce carbon emissions and create cleaner energy.

As part of their larger goals to reduce carbon emission, Chinese officials recently released the first images of their new 'solar highway.'

The world’s first first photovoltaic expressway is under construction in Jinan, E China’s Shandong province. It’s set to open to the public in December this year pic.twitter.com/m1MBKzPaHH

This solar roadway project is part of one of China's most highly-trafficked areas, the Jinan City Expressway. In total, the solar roadways will only stretch 1.2 miles.

In order to both preserve the photovoltaic panels from pressure while optimizing its exposure to the sun, engineers developed a special transparent concrete to go on top of the solar panels.

"With the capability of generating electricity under sunlight, photovoltaic roads can release power to electric vehicles passing on them. They are also able to instantly melt winter snow covering on the road."

The top layer of the Jinan City solar highway is the aforementioned transparent concrete. The material contains nearly identical structural properties with standard grade asphalt. The middle layer is where the PV panels can be found. Several reports from officials use the words "weight bearing" to describe the solar panels -- an impressive feat given the technology's early struggles with being easily breakable. The bottom layer is an additional separative layer meant to keep the panels completely dry and away from the damp soil.

While the solar panels are "weight bearing," they might not be able to easily handle the load of large transport trucks. The road can safely handle vehicles as large as medium-sized trucks.

The construction is now complete, but the road's connection to the grid is still pending. Engineers with the project expect to add wireless vehicle charging into the panels. However, state media reported that the road could be open for use before the end of the year.

This isn't the country's first solar roadway. In fact, this new solar roadway will mark the second solar strip for the city of Jinan. The Qilu Transportation Development Group opened up the first roadway last September. It took 10 months to build and includes 790 square yards of solar paneling. 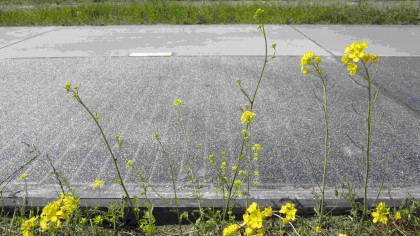 Solar Roadways Around the World

One of the most interesting elements of this project is that when solar roadways were first introduced, very few engineers gave positive feedback. Those engineers might have to change their tune as more countries are presenting projects similar to China's -- and they're doing it with quite a bit of unexpected success.

In recent years, a lot of proponents for solar roadways pointed to the Netherlands and their construction of the world's first solar bike path in 2014 for inspiration on larger solar projects. And that project's innovation to look down rather than looking up for solar panels sparked a new wave of thinking about where to generate energy.

"In the Netherlands, we have about 140,000 kilometers of roads–enough to go three times around the world, and more. It’s a huge area, more than all of the rooftops combined," said Sten de Wit from TNO, the research organization that helped create the Netherland's bike path in 2014.

Since that time, South Korea, the United States, and now China have expanded their research efforts to test the feasibility of these roads on a larger scale.