China is joining the likes of France and Britain with its goal of ending sales of all fossil fuel-powered vehicles.

China sold 28.03 million cars last year internationally making it the world’s largest auto-market. Now, it's drastically altering this environment by joining the likes of France and Britain with its goal of ending sales of fossil fuel-powered vehicles. 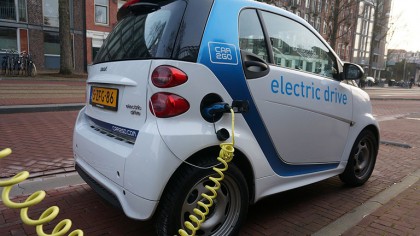 This move could accelerate China’s push into the electric car market led by companies such as the Warren Buffet-backed BYD, China’s largest electric-vehicle maker, and state-owned BAIC Motor Corp. Regulators are presently working on a timetable to end production and sales of these cars.

“The move will have a profound impact on the environment and growth of China’s auto industry,” Xin Guobin the vice minister of industry and information technology, said at an auto forum in Tianjin on Saturday.

China vowed to cap its carbon emission by 2030, putting a dent in their problem of air pollution. In fact, those residing in Northern China live 3.1 years less than those in the south due to this contamination.

“The implementation of the ban for such a big market like China can be later than 2040,” said Liu Zhijia, an assistant general manager at Chery Automobile Co., the country’s largest passenger car exporter told Bloomberg. “That will leave plenty of time for everyone to prepare.”

Electric cars are already leading the pack in sales for this year, BYD sold 46,855 electric and plug-in hybrid vehicles, according to the China Passenger Car Association.

Other major manufacturers are joining in on the implementation plan, earlier rather than later. Honda Motor Co. is introducing an electric car for the Chinese market in 2018. Nissan will also introduce an upgraded model of its Leaf EV in 2018 or 2019.

Meanwhile, William Li-an internet mogul-will be selling his ES8, an SUV completely powered by batteries by December of this year. Li and his company NIO are collaborating with state-owned Anhui Jianghuai Automobile Group who also happens to be working with Volkswagen AG to bring an electric SUV to consumers next year.

Where does the US fit in?

Tesla, seemingly always ahead of the game, is also working with the Shanghai government to begin local production which could greatly bring down costs of manufacturing, labor, and shipping.

Fact is if western automakers want a piece of China’s growing EV market, they will need to follow Tesla’s lead and electrify vehicles in their fleet, so says Michelle Krebs, an executive analyst at AutoTrader told The Los Angeles Times.

“Regardless of what we do here in the U.S. on a federal level, U.S. automakers will continue to develop those vehicles because they can’t ignore the China market,” she said. “It’s huge, and it’s where their future growth and future profits will come from.”

Automakers seem to be preparing for the upcoming challenge, Daimler (Mercedes), Volvo, Jaguar, Volkswagen, and others announced that all cars in their lineups would be offered in electrified versions between 2020 and 2030. Just in time for the implementation of China’s nationwide ban and the dramatic upsurge in the EV market.