China's new hypersonic plane can travel at more than 6,000km/h (3,700mph), which is five times faster than the speed of sound.

A Chinese research team has developed an ultrafast plane which can also carry dozens of people and tonnes of cargo.

The team says the plane can travel at hypersonic speed and can fly between New York and Beijing in two hours, which usually takes 14 hours on a passenger jet. The two cities are approximately 11,000km apart.

This means the plane will travel at more than 6,000km/h (3,700mph), five times faster than the speed of sound. The team is also involved in China’s top-secret hypersonic weapons programme.

“It will take only a couple of hours to travel from Beijing to New York at hypersonic speed,” the researchers led by Cui Kai said.

A smaller model of the plane was tested in a wind tunnel by Cui and his team who are at the Chinese Academy of Sciences in Beijing.

The tunnel has been previously used to carry out aerodynamics evaluations for China’s most recent hypersonic weapon prototypes. The model plane was pushed to seven times the speed of sound. This is equivalent to more than 8,600km/h. They found out the plane performed surprisingly well.

The new hypersonic vehicle has been called the “I-plane” by the team. The name comes from the shadow cast by the plane on the ground.

When the plane is coming down like a dive-bomber, it casts a shadow in the shape of a capital “I”. The I-plane has two layers of wings. The design resembles the biplanes used during the First World War. Most biplanes, which were the earliest type of aircraft, disappeared after the 1930s.

This is because plane designers wanted higher speeds and fuel efficiency. The vehicle has lower wings reaching out from the middle of the plane’s main body like a pair of arms. There is also a third flat wing reaching over the back of the aircraft.

This biplane design will enable the aircraft to handle more payload than existing hypersonic vehicles that have a contoured shape and delta wings, according to the researchers.

Questions to be answered

The researchers said the amount of lift generated by the hypersonic vehicle was about one-fourth of a commercial jet of the same size. This means an I-plane as big as a Boeing 737 can carry about five tonnes of cargo or 50 passengers.

At the moment a typical Boeing 737 can carry up to 20 tonnes of cargo or approximately 200 passengers. 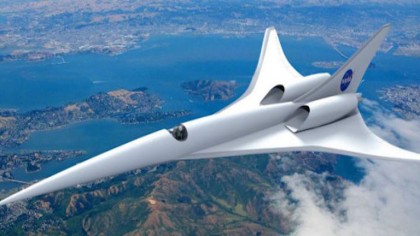 The design the research team has developed has an answer to the aerodynamic configuration problem the hypersonic plane models before had. But there are many questions that still have to be answered so that this design can move forward.

The hypersonic vehicles that are being developed globally have so far remained in the experimental stage due to the technological challenges.

They are not yet at the stage where they can take passengers. Countries such as China and the US are on the other hand in a race to develop hypersonic weapons. A hypersonic vehicle would enable them to effortlessly go into another country’s missile defense system.

A 123,000 MPH Nuclear Rocket Could Reach Mars in Only One Month