China has released a massive solar-powered drone. The drone has a 40-meter wingspan but weighs only 400 kilograms. The superlight drone is designed to stay in constant flight at 20,000 meters for days by using renewable energy to power its eight electrical propellers. It can travel up to speeds of 200 kilometers per hour!

Dubbed "Caihong-T 4" (CH-T4), or Rainbow T-4, the solar-powered drone was built by the Chinese Academy of Aerospace Aerodynamics (CAAA). It has a double-bodied fuselage, a cranked wing, and a twin tail. It is wider than a Boeing 737 jetliner but owes its lightness to a carbon fiber and plastic construction. The CH-T4 is capable of flying at 20,000 meters up into the atmosphere and has a line of sight radio and visual coverage of 1,000,000 square kilometres—an area nearly the size of Bolivia.

Drone to fly for several months

CAAA scientists reported that they are aiming to have the CH-T4 increase its flight time to several months, requiring only minimal human supervision. The flight height allows it to fly above the clouds giving it full access to constant sunlight. During the night the solar-powered drone will pull from stored batteries to power its engines. 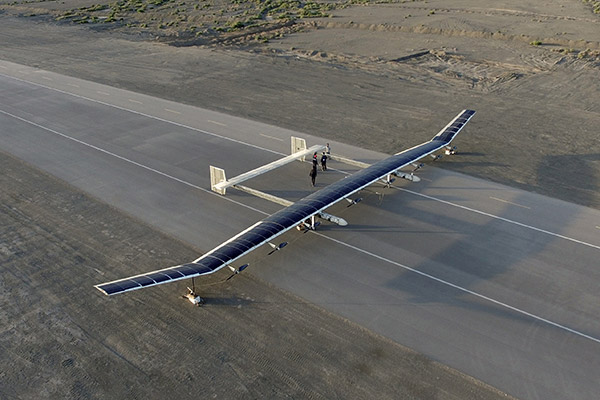 China is competing with the Defense Advanced Research Projects Agency (DARPA) and Facebook in the race for long-duration drone development. The drone has obvious uses for surveillance and it could be used for both military and anti-terrorist applications. For both militaries and tech firms, its ability to cover so much territory makes it an excellent data relay and communications node. This will allow the drone to replace or backup satellite communications, maintain coverage between distant aircraft and ships, or even provide broadband to rural Chinese households.

CH-T4 is second only to the NASA Helios Prototype in size and flight altitude. The Helios boasts a 246-foot wingspan, and an elevation of 30, 000 meters. The Helios has the goal to fly at the sustained height of 30,000 meters for at least 24 hours, including at least 14 hours above 15000 meters.

The Chinese have big hopes for the solar-powered drone and are working hard to develop its technology that will minimize the drone's need to land for maintenance and refueling. Shi Wen, head of UAVs at CAAA, claims, "Once the Caihong reaches a certain height, it will be free from cloud cover and the sun can power it for as long as its controllers want."

The potential for these huge drones is exciting and no doubt the technology will rapidly improve with such big players as Facebook, NASA, and CAAA involved.