Planned as a tourist attraction, this skyscraper has gained a lot of media attention recently, thanks to a massive waterfall cascading over its façade.

There is no end to the number of skyscrapers in China. Every province and town, especially big cities have skyscrapers galore, reaching for the skies. That makes it quite a challenge for architects and builders to think of innovative ways to make their masterpieces stand apart from the crowd.

One such masterpiece has been created in Southwest China where a 108-meter-tall waterfall cascades down one side of a huge skyscraper in the Guizhou province!

Intrigued yet? This novel idea is an architect’s dream and no; it is not a colossal leak in the building! It is, in fact, a humongous waterfall cascading down a 121-meter-tall building in China.

This building is situated in the central business district of the city of Guizhou and was constructed in Guiyang as part of the Liebian Building.

The Liebian Building in Guiyang, China, which has the world’s tallest artificial waterfall on its facade... pic.twitter.com/DRAsOMGwsh

Despite the immense novelty behind this giant of a building, it has not been short of controversies. The latest local controversy revolves around the amount of power needed to facilitate the process of this waterfall.

For this entire system to work like a well-oiled machine, it needs at least $118 or 800 Yuan every hour for its four pumps, which is a lot of electricity if this waterfall were to function on a daily basis. However, according to the managers of the building, the waterfall will not function on a daily basis and will be saved only for special occasions or events and that too only for small periods of time, say 10-20 minutes.

Moreover, they plan to utilize only tap water or recycled rainwater for the operation of the waterfall. Regardless of how much money and electricity goes into this creation, it has not stopped being a definite symbol and landmark of the city as well as a popular tourist spot that calls people from miles.

You are not fooled by your eyes! Stunning #waterfall is spotted cascading down a building in Guiyang, China pic.twitter.com/GKdoFHFKDA

On the debut of this masterpiece, UK Times wrote, “People in the southwestern city of Guiyang telephoned newspapers to report what they believed was a massive water leak. When reporters arrived at the building, they realized that the owner of Liebian Mansion had created a waterfall that gushes down the side.”

The skyscraper definitely has some concerning ramifications when we talk about its environmental impact. But as clarified by the managers of the building, they are taking due precautions in ensuring they do not waste or exhaust our natural resources in the operation of this visual treat. 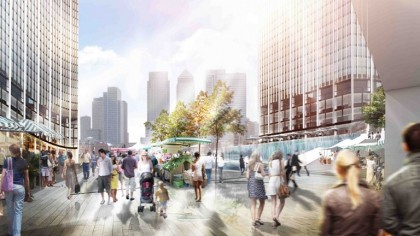 That said, this water feature streaming down the façade of the building is definitely an impractical approach, no matter how stunning a spectacle it is!

A local, on the thought behind this novel concept also shared with Kanka News, “It’s quite novel. If you do it on a hot day, it will feel very comfortable. It is still very eye-catching.”

When we check out the video footage of this spectacle, we see a massive stream of water plunging down the glassy building, reflecting the sunlight and causing eyes to look up in wonder. A creation indeed!