China is the latest, and largest, nation to ground all Boeing 737 Max 8s after the aircraft's second crash in six months.

As the investigation of the crash of Ethiopian Airways flight 302 continues, China and other nations have started to ground their fleets of Boeing 737 MAX 8s as a safety precaution.

Several airlines have grounded their fleets of Boeing 737 MAX 8 aircraft as the investigation of Ethiopian Airlines flight 302 out of Addis Ababa continues and the world mourns the 157 people who perished on board.

The Ethiopian Airlines flight was the second Boeing 737 MAX 8 to crash in 6 months, prompting concerns about the plane’s airworthiness. Indonesia’s Lion Air flight 610 crashed into the Java sea on October 29th, 2018, killing all 189 on board.

As of now, officials have no idea yet as to the cause of the crash of Ethiopia Airlines flight 302, and there is no evidence yet that the cause of the crash is in any way linked to the cause of Lion Air flight 610’s crash, but the coincidence is worrying. "It's highly suspicious," said CNN aviation analyst Mary Schiavo, the former Inspector General of the U.S. Transportation Department. "Here we have a brand-new aircraft that's gone down twice in a year. That rings alarm bells in the aviation industry, because that just doesn't happen."

Some countries aren’t waiting before taking action. China’s Civil Aviation Administration (CAA) is the latest national regulator to announce that it was grounding all 737 MAX 8s, making China the largest nation yet to ground its fleet, joining Ethiopia and Indonesia who have ordered that flights of the 737 MAX 8 be halted.

"Given in both air crashes, the aircrafts were newly delivered Boeing 737 MAX 8, and both accidents occurred during the take-off, they share certain similarities," said the CAA, in a statement announcing the groundings.

China’s CAA isn’t the first to call out the similarities between the two planes. On CNN’s “Newsroom”, former Federal Aviation Administration (FAA) safety inspector David Coucie cautioned air travelers, “I've never, ever done this before,” he said, “I've never said that, 'Hey, it's unsafe to fly a particular model' but in this case, I'm going to have to go there. I just looked at the flight data of that aircraft: It’s strikingly similar, same issues we had with the Max Air. So yeah, I would watch for that airplane.”

Cayman Airways has also grounded the two 737 MAX 8s it has in its fleet and India is reportedly looking into its fleet of 737 MAX 8s. Comair, a South African airline, has also grounded its 737 MAX 8, which it only just took delivery of a few days ago. It said it would wait until it had a chance to speak with safety officials at Boeing and other airlines before putting the plane into service.

Special attention is being paid to the FAA as it is the certifying authority for the 737 MAX 8, as well as the regulator’s global authority more broadly. Were the FAA to issue an order similar to China’s CAA, it would have global resonance and effectively ground all 737 MAX 8 flights around the world as other aviation authorities followed the FAA’s lead. The last time the FAA issued such an order was for the McDonnell Douglas Corp.'s DC-10 in 1979.

The order from China’s CAA prompted a widespread sell off of Boeing stock today, cutting the price of Boeing’s stock by nearly 13% at one point before rebounding to end the day down by 5%. China is the largest customer of the Boeing 737 MAX 8’s with 97 planes across all its carriers. The Boeing 737 model is Boeing's most profitable aircraft model, which includes the 737 MAX 8, which it has hoped would help it compete with Airbus' new line of fuel-efficient aircraft, the A320neo.

Boeing, for it’s part, hasn’t issued new guidance for airlines about the 737 MAX 8, saying in an email to The Verge that “[w]e have engaged our customers and regulators on concerns they may have — and would refer you to them to discuss their operations and decisions.”

“Safety is our number one priority and we are taking every measure to fully understand all aspects of this accident, working closely with the investigating team and all regulatory authorities involved. The investigation is in its early stages, but at this point, based on the information available, we do not have any basis to issue new guidance to operators.”

Speculation Over Link Between the Two Crashes

It is suspected that the crash of the Lion Air flight might have been caused by the pilots trying to regain control of the airplane after anti-stall software turned on after receiving erroneous flight data. The software is designed to push the nose of the plane down to prevent the plane from stalling, and the investigation of that accident has indicated that the plane made dozens of dips during its ascent.

The two black boxes for the Ethiopian Airlines flight have been recovered, but are said to be damaged and the investigation is only now getting underway. An eyewitness told CNN that smoke could be seen coming from the plane just before the plane crashed.

In both the Lion Air 610 crash and the Ethiopian airlines 302, the pilots reported technical difficulties shortly after take-off and requested permission to return to the airport. Six minutes after take-off, flight 302 lost contact with air traffic controllers and plunged, nose first, into the ground, according to initial analysis of the crash site. 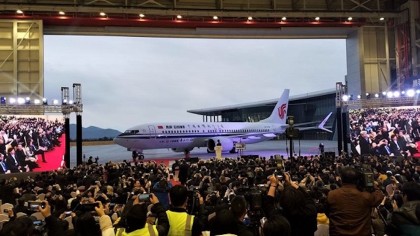 The Wall Street Journal had earlier reported that a planned software update for the 737 MAX 8, which was initially scheduled for January, would be pushed back to April, due in part to the effects of the partial US-government shutdown last January as well as differences of opinion about the scope of the necessary safety fixes between Boeing safety officials and federal regulators, among other reasons.

Boeing has said that it is working with the National Transportation Safety Board and the Ethiopian Accident Investigation Bureau to find out what happened in the case of Ethiopian Airlines flight 302.

“Boeing is deeply saddened to learn of the passing of the passengers and crew on Ethiopian Airlines Flight 302, a 737 MAX 8 airplane,” the company said in a statement. “We extend our heartfelt sympathies to the families and loved ones of the passengers and crew on board and stand ready to support the Ethiopian Airlines team. A Boeing technical team will be travelling to the crash site to provide technical assistance under the direction of the Ethiopia Accident Investigation Bureau and U.S. National Transportation Safety Board.”

Boeing 777-200 Chunks Rain Down on Colorado After Engine Trouble