China Plans on Creating an Elevated Bus that Drives over Traffic

The race to create the next big thing in the transportation industry has brought some interesting solutions, like the hyperloop or a new Sleep Bus, but Chinese engineers have created a bus that drives overtop of traffic. The new design is said to be under construction and will be ready for testing by the end of the year. This futuristic bus has a 2.1-meter opening underneath to allow for all kinds of vehicles to drive below, and it is by far a cheaper solution than building subways. Of course, there are the obvious downsides to a large vehicle driving over traffic in the event of an accident, but the engineers behind the project are hoping to bring it into Chinese cities very soon.

The bus will have one large platform to carry passengers which will be held up by wheel structures. Two lanes of traffic will be able to fit underneath the bus while moving, and the platforms above will be able to hold 1,200 passengers. Part of why this design is being pursued is to decrease congestion from bus traffic and create a more cost-effective public transportation method as compared to traditional subways.

A scale model of the bus was demonstrated at the 19th China Beijing International High-Tech Expo this week according to Daily Mail. The current design has the buses running on a fixed track on the roadway in order to keep it from veering into traffic. Another key function of these buses will be to decrease carbon emissions, as all models will run off of electricity. Power systems will be similar to modern cable car and light rail techniques. 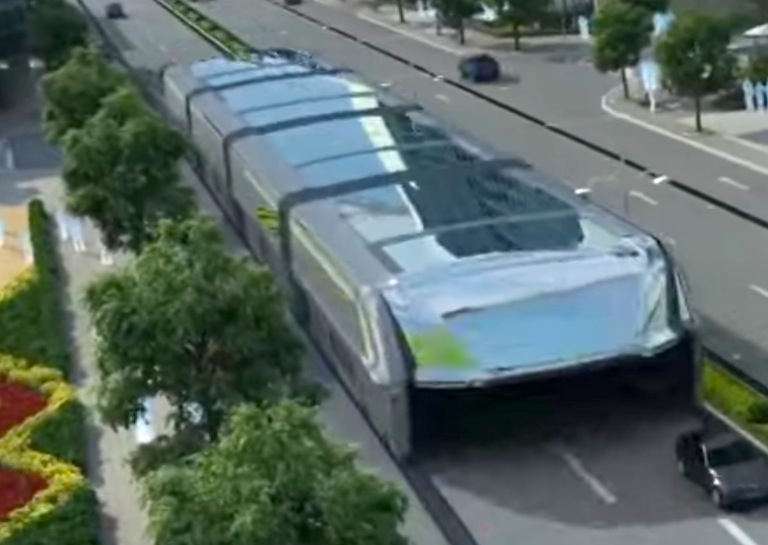 These machines are like a cross between buses, trains, and cable cars with all of the aspects hopefully coming together to create an eco-friendly, effective public transportation method. The dangers of having this structure on a moving roadway are obviously great, but engineers are hoping to implement safety measures to overcome these fears.